E-Fan X slated to generate lift and 'leccy by 2020 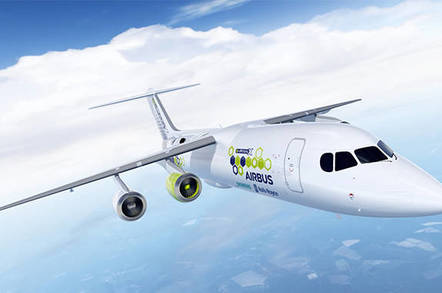 British aero engine maker Rolls-Royce will team up with Airbus and Siemens to develop hybrid electric-powered flying machines, it has been announced today.

Speaking at the Royal Aeronautical Society in London, the trio said their intention was to have a demonstration engine ready by 2020, called the E-Fan X.

The BAe 146 demo aircraft will at first have one of its four gas turbine engines replaced with an electric engine, powered by batteries and an onboard generator using jet fuel. The team will then move to two electric engines once the technology is stable.

Each company has its own role in the project – Siemens will design the 2MW electric motor, Rolls-Royce will build the generator that powers the engine and the engine's body, while Airbus will attach the new assembly to the demonstrator and link it up to flight controls.

The demo aeroplane will be used to measure the effects of temperature, altitude, electromagnetic forces and other factors on the electric engine, and then use the data to improve its performance, reliability and safety.

The project also aims to solidify standards that can then be used to regulate future electric aircraft, and to train new designers and engineers to continue their work in the future.

Paul Stein, Rolls-Royce's chief technology officer, said: "This is an exciting time for us as this technological advancement will result in Rolls-Royce creating the world's most powerful flying generator."

Siemens CTO Roland Busch said: "With the E-Fan X partnership, we now take the next step to demonstrate the technology in the air."

Oliver Walker-Jones, head of comms at Rolls-Royce, dug into the tech a bit. "The AE2100 is a turboshaft engine. It usually drives a propeller. We've taken off the propeller and the gear box and replaced it with a generator."

"This means that instead of creating thrust through a prop or fan, we only create electricity from the engine through the generator instead. All the engine does is burn fuel to turn the generator.

"It's like in your car, all your engine does is turn a shaft that connects to your wheels. You've still got an exhaust that throws some gasses out of the back, however they don't contribute to the forward momentum of your car. It's the same for this AE2100 turboshaft.

"So we use the engine to turn the generator and create electricity. We then distribute that electricity using cables in the aircraft. That then powers an electric motor on the wing, which turns the electricity back into a turning force, therefore turning the fan to create thrust." ®