Lock them up and throw away the (don)key 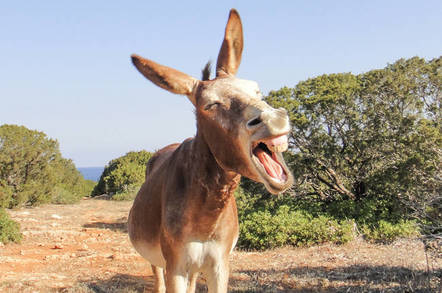 Eight donkeys were released from an Indian jail yesterday after the law proved itself to be, well, an ass, and imprisoned them for eating the prison officers' plants.

The jail in Urai, Uttar Pradesh, freed the beasts of burden after four days due to an unnamed local politician paying their bail on the owner's behalf.

The plants consumed by the donkeys cost several lakhs (hundred thousands) of rupees, according to the jail authorities.

Speaking to Asian News International, Head Constable R K Mishra said: "These donkeys had destroyed some very expensive plants which our senior officer had arranged for planting inside the jail.

"Despite our warning to the owner of these donkeys, he let his animals loose in the area. We then took the extraordinary step of placing them in detention."

The owner of the donkeys, identified only as Kamlesh, made no comment on the situation or the identity of the politician who helped him, saying: "I came here to get my donkeys released."