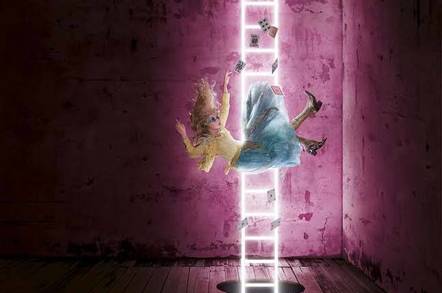 QKD uses a characteristic of quantum mechanics to protect keys used to encrypt data using classical crypto schemes: if Eve tries to snoop on the key Alice is sending Bob, the quantum state/s a photon carries are destroyed. Alice and Bob know there's an eavesdropper, and the key Eve eavesdropped is useless.

However, compared to conventional telecommunications systems, QKD is slow: most systems based on photon-by-photon transmission of crypto keys run at speeds of hundreds of kilobits per second.

In a paper based on research funded by the United States Navy and Defense Advanced Research Projects Agency (DARPA), published in Science Advances and available as pre-press at arXiv, the researchers explained that to get faster key distribution rates, they worked to overcome the limits on photon detectors' speed.

The paper explained that if keys are distributed as one-qubit-per-photon, the system speed is limited by how fast states can be generated.

The solution is to encode more than one state on the photon – to turn it into a “qudit” (more than two dimensions per photon) instead of a qubit – in this case using time-of-arrival as one dimension, and the phase of the photon as the other.

“The secret key is calculated using the sifted photon time-of-arrival data, and the amount of extractable secret data is determined using the noise level observed in the sifted phase measurement data,” the paper explained.

The researchers note that their technique is robust enough to be used to send photons across free space, although they expect its first application would be in metropolitan-scale fibre networks. ®