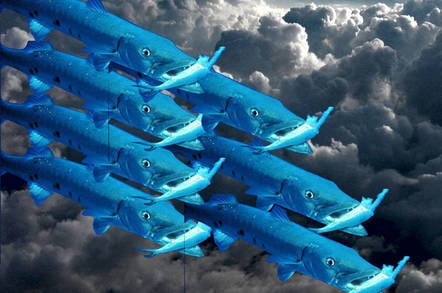 Barracuda is a $400m-run-rate business based in Campbell, California, USA, that sells data protection and security products. It has been making a move to flogging subscriptions as its customers move away from appliances, preferring to consume services. It's been making just two to four per cent profits on $80m-$95m quarterly revenues for seven quarters now, after four quarters of losses.

Earlier this month it bought Sonian and its cloud archiving products for an undisclosed sum, which we thought may be around $100m.

The Thoma Bravo price represents a premium of 22.5 per cent on Barracuda's ten-day average stock price prior to November 27, 2017, of $22.49. Barracuda's board is unanimously in favor of the deal, and the biz will now operate as a private company. No major changes to its product set have been mentioned.

CEO BJ Jenkins said he thought the proposed transaction would provide an opportunity to accelerate Barracuda's growth, without saying how, though he must have a good idea. He did say: "I expect that our employees, customers, and partners will benefit from this partnership," and this at least doesn't mention any restructuring.

William Blair analyst Jason Ader said: "Thoma Bravo appears to have paid a fair price—about 17.5 times enterprise value to free cash flow on our calendar 2018 estimates—and we consider there to be a low likelihood of another bidder emerging.

"For Barracuda, we believe the Thoma Bravo acquisition is probably the best scenario for shareholders, given skepticism regarding the company’s ability to transition the business from on-premises appliances to cloud-based solutions and recent margin challenges.

"While the frequency of ransomware attacks has been creating demand tailwinds for both Barracuda’s email security and backup products, we believe the company also faced some challenges from the transition to cloud and feel this takeout price is fair."

Usually private equity buys a company so that it can make changes away from the intense glare of public company reporting requirements and shareholder concerns. This doesn't have to mean severe cost-pruning or a CEO change, but it can often mean product and product line overhauls. Sometimes there can be a joining together of components from two or more companies to make a more viable one.

The proposed transaction is expected to close before Barracuda's fiscal year end of February 28, 2018, subject to the usual approvals. ®

Quarterly revenues and bookings up a fifth – again