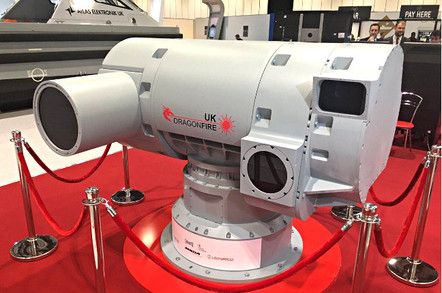 British miltech boffinry outfit Qinetiq has opened a testing centre named the Dragonworks for the building and tweaking of giant laser cannon.

So named after the Dragonfire weapon which will be its first product, the Dragonworks is located near Farnborough, in the heart of the leafy Home Counties.

The facility, which includes a dedicated clean room for assembling laser weaponry as well as "the UK's only Reflective Hazard Assessment Tool" (RHAT), is built to allow full-power testing of laser cannon in a controlled, indoor setting.

One presumes the facility either has a lot of mirrors or several hundred gallons of black paint on the inside. Either way, 27 people work on it full-time, along with the indirect support of many others.

First off the Dragonworks assembly line will be the MBDA Dragonfire laser cannon, as covered in shining detail here on El Reg. Once assembled and tested in early 2018, the laser element of Dragonfire will be attached to a "beam director" supplied by Italian-headquartered defence contractor Leonardo. Following a full-power zap under indoor test conditions, the complete weapon will then be shipped to MoD test ranges at Shoeburyness, just east of Southend in south Essex for full-power outdoor trials.

"Data collected using the RHAT will inform the safety case for these and future trials, ensuring the reflectivity of targets is fully understood and any risk mitigated accordingly," we are told.

The £30m Dragonfire laser cannon, formally known as a Laser Directed Energy Weapon (LDEW) will eventually be installed aboard a warship, El Reg understands, once the characteristics of the laser have been figured out. One of the biggest problems is ensuring that reflections of the laser beam don't accidentally zap anything else nearby; hence the indoor and outdoor trials. Another potential problem, which non-energy-beam-based weapons don't face, is the weather: heat and light-based systems should, in theory, be much reduced in effectiveness by rain, fog and mist. The problem is already well understood in military circles from combat aircraft's passive electro-optical sensor systems.

Simply put, light and heat don't penetrate water vapour very well, hence why foggy mornings are darker and colder than sunny mornings. Whether boosting light beams to tens of kilowatts overcomes that effect is something the Dragonfire project will be finding out. ®

US buys in to QinetiQ's millimetre wave technology