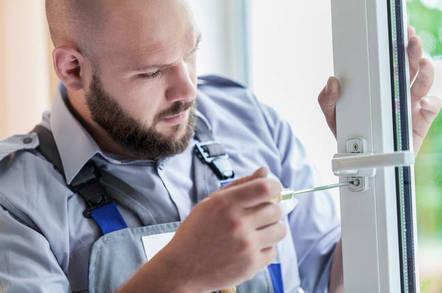 Episode 16 "What you're looking for is plausible deniability," I say to the Boss.

"Well you know the rule about hanging up on someone?"

"Always hang up when YOU'RE talking, never when they're talking."

"They'll hear the handset going down."

"It's like the rule about throwing out your partner's crap."

"Well say she's got, I dunno, an ironing board that she inherited from a great aunt that's about as stable as a three-legged dog coming off Ritalin. You want to chuck it out but she'd know it was you. What you do is wait until the day before someone's wedding and throw it in a bin miles away. The day of the wedding you wander around the house with an unironed shirt becoming increasingly frantic about where the hell the ironing board's got to."

"The secret to all these is that it needs to be YOU who appears to be disadvantaged."

"Why are you telling me this?"

"No reason. Anyway, why's your desk on fire - I put all my expenses receipts on your desk just this morning?"

The Boss dashes off only to find out it's a false alarm - this time.

It's a Friday, the Christmas holiday is looming and I can't be stuffed starting any job which is going to take longer than a quarter of an hour to fix - only the Boss has some bee in his bonnet about clearing the helpdesk queue backlog.

The problem with that is the helpdesk stopped putting most stuff into the queue about two years back, so the only things that are in there are ancient problems and the too-hard jobs that no one wants to touch.

"So about that iPad problem..." the Boss continues.

"It's not an iPad problem, it's an iPAQ problem - and it will never be resolved."

"Exactly! It's just a device that Apple stole a naming convention from and which no one has used for many years."

"And why won't it be resolved?"

"Because the user concerned wanted to hook it up to our network."

"And before we could do it he fell out a window."

"So why's the job still open?"

"Because the resolution text field is mandatory."

"And if we put 'user fell out window' every time that happened we'd get database normalisation warnings from the helpdesk software."

"I... don't understand what you're talking about."

"So what about this printer issue?"

"Network too slow for video downloading?

"Oh that one. We gave him admin access, but sadly before he could use it there was a data normalisation warning - as an example to others. You'll note that it's the only outstanding admin access issue in the system, so we not only resolved the problem but also prevented a recurrence."

"I know – you want to know about the job from this morning with no updates. I've actually not looked into it but from what I can see some user wants us to join his home machine to the domain and also link his personal cloud storage to one of the main company filestores."

"And that's a tricky one - because on the one hand we're trying to encourage BYOD so that staff don't use their home machines for personal stuff but on the other hand we're also trying to ensure the inherent safety of our systems."

"And we're still thinking about it."

"Do you have an expected resolution time?"

"I think it will largely depend on what floor he's on and whether he has a window in his office."

"See what you're looking for is plausible deniability," I say to Security.

"I don't know what you're talking about."

"Well you know the rule about stealing something from the company?"

"Always steal something from your own desk too?" Security says.

"Exactly - but also the other one about making sure there's no webcam on your Boss's laptop before you take it home."

"Well you in this situation might see an open window and signs of a struggle and think suspicious workplace accident - but you know what I see?"

"I see a database normalisation warning."