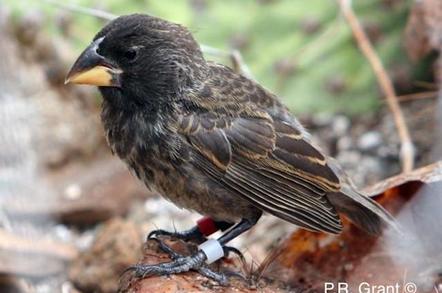 New research has documented a species of finch evolving on the Galápagos island of Daphne Major, 1,000km off the west coast of Ecuador, in just two generations.

It's called the "Big Bird" lineage because, um, as finches go, the birds are relatively large.

Although Charles Darwin originally thought evolution would take many decades, recent research suggests it can happen on much faster timescales (especially if you allow crossbreeding). The apple maggot fruit fly (Rhagoletis pomonella), for example, was a spin-off from a species that fed on hawthorn in the northeastern United States. It appeared within about 100 years of the apple's arrival in America.

The large cactus finch bred with the native medium ground finch (Geospiza fortis). And after two generations, the Big Birds ceased mating with the natives – only among themselves. So bam. New species.

In 2010, the authors observed about 23 individuals of generations three to six on the island.

Matthew Webster, a bioinformatician at Uppsala University who worked on the genomic analysis, told The Register it could be the case these types of events are rare, or they happen "quite often" and "we've just been lucky to see this example now."

He added that it's not known if Big Birds would breed with another large cactus finch, or if they could fertilise local species' eggs. But Big Birds also eat from different food sources and have a unique song as well as different beak widths and depths.

Webster said the researchers are now looking for other examples of hybrid lineages on the island.

The wider scientific community seems impressed. Luis De León, an evolutionary biologist at University of Massachusetts, Boston, told The Register: "The authors have combined the wealth of historical data collected by Peter and Rosemary Grant in [the] last 40 years with modern genetic data from the genomic era. They have confirmed that this new lineage of finches is essentially a new hybrid species.

"This is an exciting, but likely extremely rare event, which raises the question of what is the contribution of such events to the diversity of Darwins' finches or other species in general."

James Mallet, an evolutionary biologist at Harvard University, said: "It's probably a really good example of a species forming in nature and persisting for a long time."

He added that most small species, with less than a dozen individuals such as this one, "will tend to die out" due to environmental change or food sources disappearing. "It's a very small start which probably is done over many times," he said.

However, he said if a group of individuals can keep mating among its own and keep a "competitive advantage" then the species will "keep on going".

Among biologists, the criteria for qualifying as a new species, Mallet said, is "nearly arbitrary". He said some biologists would not define crossbreed offspring as a new species, but he disagrees. The new lineage presented here has "all the characteristics of a species" including mating among their own kind and keeping ecologically separate.