Boffins finds neutrinos sometimes collide with Earth instead of passing through 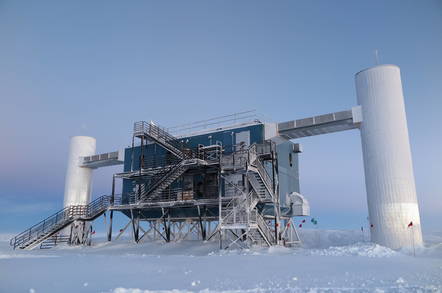 Video Thanks to work at the IceCube instrument in Antarctica, we have learned that Earth has an appetite for high-energy neutrinos: they're more likely to be “swallowed” by the planet in collisions with matter than those at lower energies.

The bad news: sorry about “new physics” expectations. The result is in line with the boring old Standard Model of physics, and the observations seem to rule out more exotic theories involving compact spatial dimensions or the still-hypothetical leptoquark.

Neutrinos are famous for how their seeming lack of interaction with the baryonic matter that dominates what we see in the universe around us – as the international particle physics site Interactions explains, 100 trillion pass through a human body each second.

There's enough of Earth, however, for those rare neutrino-matter interactions to happen from time to time. At higher energies, those interactions happen more often.

The measurement, published in Nature, was important because it was the first time physicists have proven the Standard Model's prediction about neutrinos' interaction with Earth. The number measured was reasonably close to what the boffins expected (about 1.3 times the prediction of the Standard Model, which they says is “consistent with the expectations for charged- and neutral-current interactions”).

The IceCube experiment was first frozen in 2010, and since then its 5,160 basketball-sized detectors have sought out tiny blue flashes of Cherenkov radiation emitted when a neutrino collides with the ice and releases particles such as muons.

In the Nature paper, the IceCube collaboration examined around 10,800 neutrino-related interactions to estimate the objects' direction of travel and energy.

The boffins concentrated on neutrino interactions at energies greater than a tera-electron volt (TeV), which Interactions notes is “roughly the kinetic energy of a flying mosquito”.

At a roughly 1 TeV baseline, neutrinos are most likely to slip through the atmosphere without a collision, compared to the between 6.3 TeV and 980 TeV range the IceCube Collaboration identified as the high-energy region of interest.

A note on the researchers' terminology: they refer to the likelihood of collisions as the “cross-section”, and as University of Wisconsin-Madison physics professor and the IceCube Neutrino Observatory's principal investigator said: “Precision measurements at the HERA accelerator in Hamburg, Germany, allow us to compute the neutrino cross section with great accuracy within the Standard Model—which would apply to IceCube neutrinos of much higher energies if the Standard Model is valid at these energies.”