Boffins say health issues were not related to genetic wizardry 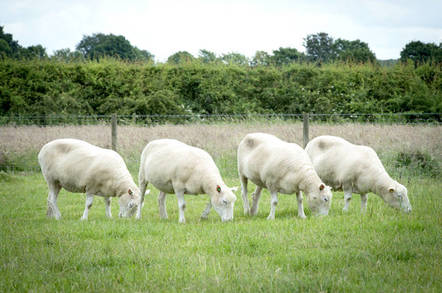 A small flock of Dollys. Photo: The University of Nottingham

New research suggests the arthritis plaguing Dolly the sheep – the first mammal cloned from an adult somatic cell – was normal for her age.

Dolly was born in the lab. To keep her DNA around, scientists replaced an egg cell's nucleus with one from an adult somatic cell. The egg cell was then zapped with an electric current to start cell division and implanted into a surrogate mother.

Her 1996 birth made headlines, although Dolly eventually developed lung disease and was put down in 2003.

Kevin Sinclair, a professor of developmental biology at University of Nottingham in Leicestershire, told The Register that Dolly also developed osteoarthritis. From around five and a half years of age (about 40 in human years), she had knee trouble, became lame and had to take anti-inflammatory medicine.

Because she was a clone of a six-year-old animal, he said there was "fear" that she'd age prematurely "as a consequence".

In the new study, appearing today in Scientific Reports, Sinclair and his collaborators analysed Dolly's bones and the four clones from the same cell line. Radiography confirms that one case had mild or moderate osteoarthritis, but it was at a similar level to what a normal sheep would experience at that age.

Dolly "for all intents and purposes was perfectly healthy," Sinclair said.

Tim King, Dolly's vet and now deputy head of the Royal (Dick) School of Veterinary Studies at the University of Edinburgh, said in a statement that the research "is an important contribution to the understanding of how cloning may impact on animal health" because it suggests Dolly's arthritis "was not as a result of cloning".

Sinclair admitted that the rates of clone survival at the embryo stage and around birth are lower than animals conceived naturally, but said "the technology has moved a long way since Dolly was born".

He said his team is next conducting a "detailed postmortem" on the animals, in particular studying the ageing process in greater detail.

Star Paws: Attack of the clones