Ads watchdog to BT: We say your itsy bitsy, teeny weeny Ts&Cs too small for screeny 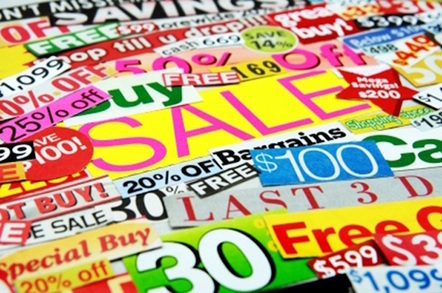 BT has had its ears boxed by the Advertising Standards Agency after one of its adverts with masses of small print was ruled "likely to mislead".

The offending advert, televised in May of this year, contained two offers for broadband packages; one for an increased discount, and the other for a £100 reward card for signing up online.

The complaint received by the ASA had a problem with the difficulty of seeing the deals' important qualifying details, which could only be spotted in small text at the bottom of the screen.

Clearcast, which pre-approves most Brit TV ads, said that the text followed guidelines and the ASA's previous judgements, and was displayed clearly on a black background.

But the ASA upheld the complaint, stating that while technical guidelines for text were met, more general rules were not. The text included abbreviations, didn't end its sentences on individual lines, and there was in total too much of it, alongside the fact that it featured important information that should have been more clearly displayed.

Furthermore, the rest of the advert featured distracting visual effects and a voice over, and the second offer's text had also been compressed, making the letters tall and thin, affecting readability.

The ASA ruled that the ad must not be shown again in its current form, and BT had to "ensure that material information was presented clearly in their advertising". ®