Others reckon Chancellor's taking it a bit too far... 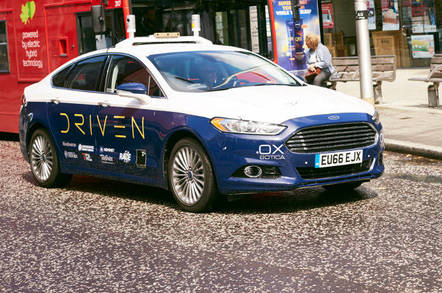 Over the weekend, chancellor Philip Hammond boasted that “fully driverless cars” would be on Britain’s roads in four years’ time. Some in the driverless car industry think this is a dangerous fantasy, while more high-profile driverless car software companies are all in favour of it.

The chancellor’s announcement was made as part of a Budget pre-briefing for the benefit of the press, in which he announced a total of £575m of government funding for artificial intelligence and electric car incentive schemes.

Tomorrow the government is set to declare changes in regulations that will allow even more driverless car developers apply to test their vehicles on public roads.

So far, only a tiny handful of companies and consortiums have been given this approval.

Yet a few people have voiced concerns over the thought of Level 5 automation (completely self-driving cars with no human intervention at all) being deployed on Britain’s roads – particularly when current trials, such as the Move UK consortium’s ongoing study in Greenwich, south-east London, has only just got to the stage of letting software take supervised control of cars on public roads.

Companies, such as Oxford University driverless car software spin-off Oxbotica, are very keen on the chancellor’s plans – unsurprisingly so, given the £13m of government money that Oxbotica’s Driven consortium has been handed to develop its technology. That funding is intended to get half a dozen vehicles “running autonomously between London and Oxford by 2019,” as chief exec Graeme Smith told us.

“These prototype vehicles will have a safety engineer behind the wheel at all times; however, at the end of the project we will demonstrate some limited Level 5 capability,” Smith continued. “The removal of the safety engineer in today’s prototype autonomous vehicles is the natural progression of this technology as it matures towards Level 4 and Level 5 – and is, after all, the ultimate goal.”

"We fully anticipate that Level 5 vehicles will start to see operations in limited geo-fenced areas and on certain roads by 2021.” – Graeme Smith, chief executive, Oxbotica

Professor Nick Reed, formerly of the Transport Research Laboratory and now UK head of mobility R&D at Bosch, agreed with Smith, though he cautioned that it is an "ambitious plan".

“Government support means accelerated testing and access to an unprecedented source of ‘real world’ data. The more data of this kind that can be collected and shared, the swifter these technologies will be available and safe for UK roads,” Reed told The Register over email. He added that Bosch, which is steadily working on driver assist and car sensor technology, expects to see fully autonomous vehicles being “ready for production by the early part of the next decade”.

Safety concerns, however, are very real. Though studies such as Woolwich’s Move UK consortium have been explicitly gathering data on public reactions to driverless cars, the deeper perception of a robot being in sole charge of a few tonnes of speeding steel will need years to manage.

Ken Tindell, an occasional Reg contributor and CTO of car security startup Canis Automotive Labs, expressed concern over speeding up autonomous vehicle testing processes – particularly when it comes to assessing the artificial intelligence aspect of them.

“Up until now, AV testing has been about development: trying out algorithms in practice to see what happens, in controlled conditions with a trained safety driver to watch the system like a hawk and take over when it goes wrong,” he told us over email. “Normally, where safety critical software is used, process-based standards (such as DO178C and ISO 26262) are adopted that require techniques such as MC/DC test coverage of software and formal methods for assessing resource usage (to calculate worst-case stack usage, execution times, response times, etc).

“But,” he added, “these techniques do not work for inherently unpredictable approaches like Machine Learning algorithms, so what is being proposed is at-scale deployment without safety drivers to provide empirical evidence for safety. And the scale needs to be huge because humans are actually relatively safe (a hundred million driven miles between fatalities). At-scale deployment to provide the evidence that AVs are safe for at-scale deployment is obviously ridiculous and dangerous.”

Clearly the pace of driverless car testing in the UK is going to increase. Where government is lobbing around large sums of money, industry will inevitably follow in the hope of catching some of that cash. Whether it is actually safe for trials to proceed at Philip Hammond’s proposed pace is going to be a bone of contention, and one that will be revisited at exhaustive length the first time a British driverless car inevitably crashes into something. ®