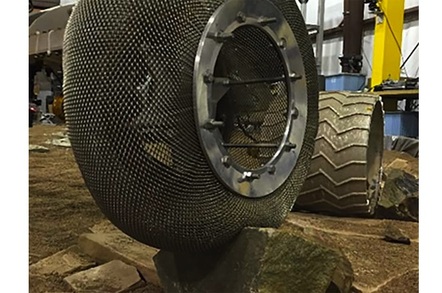 NASA has developed chainmail tires with a memory and thinks they'll do the trick for future rovers.

As readers of The Register's coverage of the Curiosity Rover may recall, the vehicle has experienced considerable wheel damage that has led to changes to its route in 2014 and a 2017 software update to preserve the wheels and provide better grip.

Throw in the fact that it's not yet possible to send a spare wheel to Mars and have it fitted, and NASA has a clear need for more robust tires.

Enter a technology called “spring tires” that use a tubular structure of steel mesh – think tire-shaped chainmail - to cushion rovers as they roll. Spring tires have many fine qualities as the mesh forms a pattern that provides good grip on many surfaces. Mesh is also light by nature and can survive some damage. But spring tires don't deform well: if one rolls over a sharp rock, it can acquire a dent - or “plastic deformation” as NASA boffins put it.

As it happens, some metals can endure plastic deformation and return to their original shape. An accidental meeting between two NASA boffins – one working on wheels, the other a material science – led to a discussion in which the material scientist explained that Nickel Titanium has exceptional “shape memory”.

The alloy was quickly pressed into service for test tires. The result, as the video below shows, is a tire that can roll right over razor-sharp rocks without ill-effects.

NASA has not outlined an immediate plan to use Nickel Titanium spring tires, but the agency is chuffed enough to have released its videos of the tech and to cheekily suggest it may have re-invented the wheel. ®