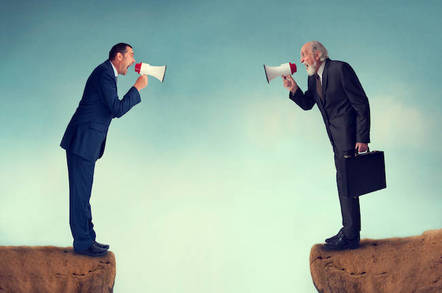 Special report Two organizations founded to help and support developers of free and open-source software have locked horns in public, betraying a long-running quarrel rumbling mostly behind the scenes.

The battleground: the, er, US Patent and Trademark Office. The law center has demanded the cancellation of a trademark held by the conservancy.

"Both marks incorporate the identical element 'software freedom' at the beginning of the mark, followed by a descriptive noun or compound noun," the SFLC petition, filed in September, argued, claiming that the similar names and services provided by the two organizations are likely to confuse people.

And it may not be much more than that. To hear SFLC executive director and Columbia Law School professor Eben Moglen tell it, the case stems from three years of being unable to arrange a meeting with SFC's executive director Karen Sandler and SFC president Bradley Kuhn to discuss some issues.

"I have been trying for three years to have a conversation about some differences with some former employees," Moglen told The Register in a phone interview, echoing a claim he made in a SFLC blog post about the trademark battle.

The Software Freedom Conservancy disputes that, and calls the trademark claim "bizarre."

In response to a request for comment from The Register, Sandler via email said: "We don't understand SFLC's reasoning or motives for taking this action. As we wrote in our blog post, the SFLC trademark cancellation filing in the USPTO was a complete surprise. We at Conservancy reiterate that SFLC never raised any complaint to us about our name, trademark, or branding prior to filing their USPTO petition. We encourage SFLC to produce any documentation that shows attempts to raise this issue with us."

Asked to respond directly to Moglen's claim that the SFC had avoided efforts to arrange a meeting, Sandler said her statement addressed that. Kuhn did not respond to a request for comment.

Moglen said there were limits to what he could say about a pending case. However, he said that any outcome he could imagine that involves the SFC would have the organization "continue to exist and flourish under its existing name."

That sounds as though there is barely any dispute here at all. But the trademark fight appears to be just part of a larger battle over the extent to which the FOSS movement should defend itself and the means by which it should do so.

In other words, are there really any repercussions for violating the GPL?

Perens created Busybox, a GPLv2-licensed utility belt for Linux and similar operating systems, that became the subject of a major GPL-related infringement lawsuit, brought by the SFLC in 2007 on behalf of the SFC.

Linus Torvalds, creator of the Linux kernel, made clear his dislike of lawyers and lawsuits in this 2016 mailing list post: "Lawsuits destroy community. They destroy trust. They would destroy all the goodwill we've built up over the years by being nice."

And the focus of Torvalds' ire was Bradley Kuhn, president of the SFC. Torvalds wrote: "I personally think this arguing for lawyering has become a nasty festering disease, and the SFC and Bradley Kuhn has been the Typhoid Mary spreading the disease."

Torvalds may have been thinking of an outbreak of litigation in Germany. A year earlier, in 2015, the SFC helped Linux kernel developer Christoph Hellwig bring a GPL lawsuit against VMware, after three years of supposed negotiation with the company.

In August 2016, the German court hearing the case ruled in VMware's favor, on technical grounds, and an appeal is said to be planned.

At the time, Torvalds described the SFLC and the SFC as if they were cut from the same cloth, characterizing the approach of both organizations as "poison."

"The Linux Foundation has historically been less than enthusiastic about GPL enforcement, and the SFC is funding a lawsuit against one of the Foundation's members for violating the terms of the GPL," Garrett wrote last year. "The timing may be coincidental, but it certainly looks like the Linux Foundation was willing to throw out any semblance of community representation just to ensure that there was no risk of someone in favour of GPL enforcement ending up on their board."

Others have levelled similar criticism of The Linux Foundation as well.

Perens summarized the situation thus: "The Linux Foundation is like loggers who claim to speak for the trees."

Next page: So close and yet so far
Page:
Tips and corrections
48 Comments