Regulators happy. Now investors get to see if buying Fibre Channel was a good idea 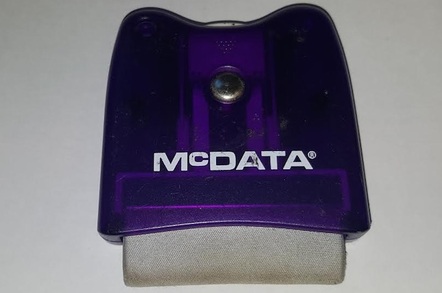 As independent Brocade passes, let us remember that lots of its tech came from buying McData in 2006

Broadcom has completed its acquisition of Brocade.

The US$5.9bn deal was announced in November 2016 but the United States' Committee on Foreign Investment took a long, hard look at the deal because Broadcom supplies Cisco with key components for its Fibre Channel products.

Buying Brocade therefore represented a chance for Broadcom to make life hard for the world's only other significant fibre channel vendor, a competition crimp of the sort that regulators traditionally dislike.

Broadcom sweetened the deal with a promise to ring-fence the SAN work it does for Cisco. It also offloaded its IP products to Extreme Networks and its Ruckus Wireless limb to Arris.

In an unrelated move, Broadcom's also announced it will move its global headquarters from Singapore to the United States, a decision that “thrilled” none other than US president Donald Trump.

Today, we are thrilled to welcome @Broadcom CEO Hock Tan to the WH to announce he is moving their HQ’s from Singapore back to the U.S.A..... pic.twitter.com/WrqUXBndyZ

Broadcom's announcement stated that Brocade has become “an indirect subsidiary” and will be led by Jack Rondoni, formerly Brocade's senior veep of storage networking and now general manager. Broadcom president and CEO added that his company now plans to do great things in the storage market.

Just how is anyone's guess: Ethernet's ever-increasing speed means many storage users fancy the chance to use one networking standard for all their networks, rather than run Fibre Channel SANs alongside their other connections. Fibre Channel is not considered a growth market, nor is it beloved of hyperscale operators. ®