How is 55 Cancri e like a Sisters of Mercy gig? Astroboffins: It has atmosphere 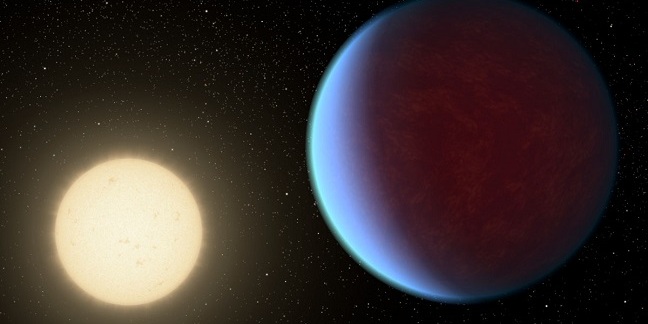 55 Cancri e, depicted with its star, likely has an atmosphere thicker than Earth's. Image credit: NASA/JPL-Caltech

A new physical model has added more support to the theory that the large exoplanet 55 Cancri e has an Earthlike atmosphere.

A study describing the work by researchers Isabel Angelo, of the University of California, Berkeley, and Renyu Hu, of NASA's Jet Propulsion Laboratory, was published Thursday in The Astronomical Journal.

Hu said in a statement that a better understanding of 55 Cancri e could help teach scientists something about how rocky planets evolve.

The exoplanet is located in the constellation of Cancer. It has a mass of about eight Earths and radius of about two so it's no golf ball.

Previous studies have suggested that magma is flowing on the surface and there's either no atmosphere, or a thick one. More evidence has been surfacing suggesting the atmosphere is the likelier theory, although the jury is still out.

Angelo and Hu used spectral data to model the flow of energy on the planet and its escape into space. They noticed a particular eastward movement of heat in the planet's outer envelope, and their model suggested that if a lava flow was the main cause, the process would be so slow it would take somewhere on the "order of tens of years", which would be "far too long", they write in the paper.

If there was a thick, Earthlike atmosphere (primarily CO or N2) and convection moving the heat, though, it would only take somewhere on the order of hours – "a much more plausible scenario".

Sergey Yurchenko, of University College of London, told The Register he favoured the authors' conclusion of "the presence of an atmosphere" but added: "I don't think this is the final answer."

He said the study used a "very limited set" of spectral data for their analysis and "this is not sufficient for making conclusions on the structure or composition of the atmosphere of this planet".

"We really need more observations in order to understand the 'climate' in this fascinating object," he added. ®