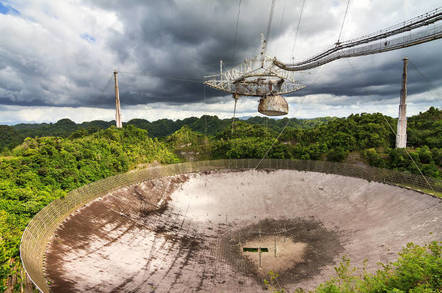 The US National Science Foundation (NSF) has approved a plan to keep the famous Arecibo Observatory running after it was severely damaged by Hurricane Maria.

The NSF this week signed off [PDF] on a proposal to continue funding work at the Puerto Rican radio observatory, and seek out a partner to help cover operational costs.

The decision puts to rest fears that, after it was battered by killer storms earlier this summer, the crucial facility would be cut off from the shrinking NSF budget and would be shut down permanently.

Under the new plan, the radio observatory will at least be able to continue operations, though the NSF notes it will have to reduce costs and seek out an outside agency to help fill out the budget shortfall.

"The decision formalizes the selection of NSF's preferred alternative: to collaborate with interested parties to maintain science-focused operations at the Observatory with reduced agency funding," the NSF said in a statement announcing the decision.

"This plan will allow important research to continue while accommodating the agency's budgetary constraints and its core mission to support cutting-edge science and education."

A complete demolition and abandonment of the site had been a possibility, as were plans to partially demolish the observatory or to put the entire facility into a mothball state until further plans were made. Keeping the facility active, however, had always been the NSF's preferred course of action for Arecibo.

Considered to be one of the most famous observatories in the world, Arecibo's 305-metre radio telescope has been used to gather data from deep space for over 50 years, and was only eclipsed in size in 2016 when China's FAST dish went online. ®