Highway to the donger zone 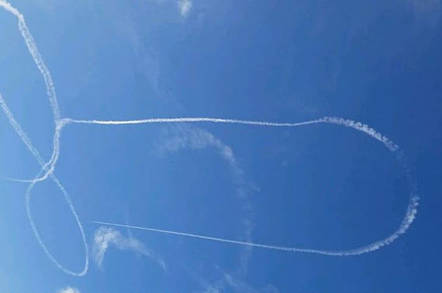 A US navy pilot in an EA-18G GROWLER is facing stiff action – after crafting a novel flight pattern that left much of central Washington state staring up at an anatomy lesson.

The offending artist flew out of the Whidbey Island air station Thursday morning and deliberately painted the sky over the city of Okanogan with the ol' twig-n-berries.

Look, we'll stop beating about the bush: they drew a giant cock in the air. It isn't a bird, it isn't just a plane, it's a super dong, too.

Residents seemed to take the sky-scribble stroke of genius in their stride, with one mother telling the Spokesman-Review her 12-year-old son alerted her to the pilot's masterwork. "I thought it was pretty funny, and so did he. A lot of people have been talking about it," she said.

Unfortunately, the military's top brass, funnily enough, didn't care for the thrusting flight pattern, and are taking a rather hard stance. Officials argued that being able to control a multimillion-dollar war machine to trace out a giant mural of one's wedding tackle in the heavens isn't actually that amusing.

In a statement to The Register on Friday, a navy spokesperson said:

The Officers and Sailors of the United States Navy are professionals, held to the highest standards, while serving our nation with pride around world. The actions of this aircrew were wholly unacceptable and antithetical to Navy core values. We have grounded the aircrew and are conducting a thorough investigation - and we will hold those responsible accountable for their actions. The Navy apologizes for this irresponsible and immature act.

The Navy apologizes to anyone who was offended by this unacceptable action.

An investigation into this flight will be conducted and if appropriate, the aviator(s) responsible will be held accountable.

Yeah, and if they pull off a stunt like this again, they'll be flying a cargo plane full of rubber dog shit out of Hong Kong – no, wait, that's Top Gun.

Far be it from us to tell the United States Navy how to go about its business, but there does seem to be a valid point to be made that this pilot maty have been merely training for a career with NASA's extraterrestrial exploration team.

Our thoughts go out to the senior officer who has to, with a long straight face, tell a room full of pilots that this is absolutely not funny. ®

* The navy spokesperson told us the plane was an F/A-18 Growler. This appears to be an honest mistake: the Growler is actually the Boeing EA-18G.

Thanks to Reg reader W4YBO for the news tip.