Breaker, breaker Electric Ducky, we got ourselves a one-driver convoy. And a new Roadster 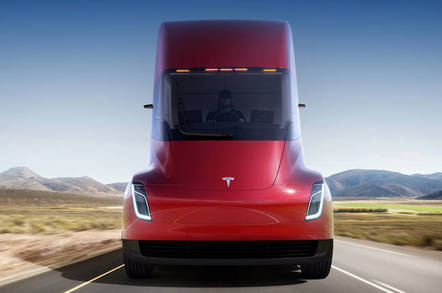 Elon Musk has launched the “Tesla Semi”, complete with a guarantee that it will not break down for one million miles of driving.

Speaking at a launch event in Los Angeles, Musk said the truck will be 20 per cent cheaper to operate than a diesel truck, in part because it will be faster.

“We designed the truck to be like a bullet,” Musk told the assembled faithful, explaining that the truck has drag coefficient of 0.36, less than some supercars. That design means it can go from zero to 96kph (60mph) in 20 seconds while hauling a full 80,000 pound load. The truck can reach 96kph (60mph) up hills with a 5 per cent gradient, which Musk again said leaves diesels eating its dust. 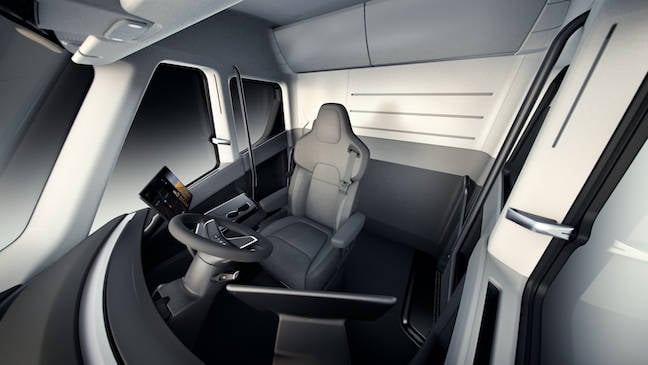 Inside the Tesla truck

Range is 800km (500 miles) fully-laden and travelling at 60mph which Musk called a “worst-case scenario.” He said that range will suffice for 80 per cent of round trips. For longer trips, Tesla will install “megarchargers” that he said will add 400 miles (643km) of range in 30 minutes. Those facilities will be solar-powered and Tesla will guarantee the price of recharges.

View from the cockpit pic.twitter.com/2kBupEXNM5

The truck will have one engine on each of its four wheels, a design Musk said will prevent jack-knifing as automation ensures each wheel does what it takes to avoid such accidents. Braking energy will be recaptured to charge the batteries.

The sole seat will be in the centre, a design Musk said improves visibility and therefore safety. The single seat is also an artefact of the aerodynamic design and the fact the trucks motor's are mounted in the floor. That location lowers the vehicle's centre of gravity, which Musk said helps to improve safety.

Autopilot will be built in and enabled in all trucks. Musk said doing so will ensure that the vehicles always stay in their lanes. If a driver is incapacitated, the truck will park itself and call for assistance.

The truck can also run in a convoy, “where one or several Semi trucks will be able to autonomously follow a lead Semi.” Such convoys, Musk said, will deliver freight at a lower cost than rail transport.

On-board computers can integrate with fleet management systems without the need for third-party equipment. 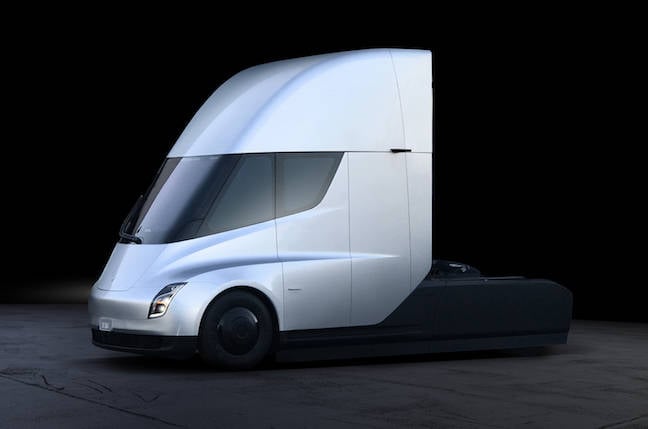 Musk said the truck will go on sale in the year 2019, but declined to name a price and instead referred to cost of ownership metrics. The entrepreneur often mentioned features designed to control cost of ownership: Tesla's even designed new glass so that the on-average-annual windshield break won't result in damage that takes a truck off the road.

Customers need to stump up US$5,000 to reserve a Semi, without a precise delivery date on offer.

Tesla Semi drivetrain is guaranteed to last 1M miles = to more than 40 trips around the earth pic.twitter.com/xfWVocUdaB

The event also saw Musk announced an updated Roadster that outpaces its predecessor and has a top speed of 402kph (250mph). ®

Register lecture: Teaching self-driving cars how to be more human

Road rage against the machines