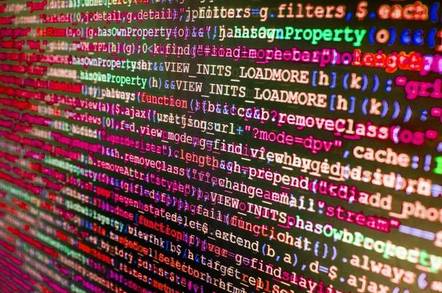 Microsoft and GitHub on Wednesday announced real-time collaboration in their respective code editors, almost as if they'd been collaborating.

So at some point in the not too distant future, developers working on a project in suitable versions of Visual Studio will be able to inspect each other's work from afar in real-time, editing each other as if they were sharing files via Google Docs... or Office 365... for, we guess, next-gen pair programming.

But not today. Interested parties, however, can sign up to participate in a private preview at a later date.

GitHub presented something more concrete, actual software that's available to be downloaded and used, albeit in beta form. Through the Teletype package for GitHub's open-source Atom text editor, developers can have their keystrokes sent through the interwebs in order to work on the same file.

Files remain stored with the person who initiated the session; contributors can be anywhere, assuming access to the requisite gear.

Teletype connects participants to GitHub's servers initially, then hands the connection off in a peer-to-peer scheme that relies on WebRTC data channels for encrypted communication. GitHub insists its servers never see your code, which maintains privacy and minimizes network latency.

Inviting other coders to your Teletype portal involves a few clicks to open a network connection and then sharing an appropriately long hexadecimal string via Slack or some other messaging app.

Pair programming, according to various studies over the years, produces higher quality code at a faster rate than that produced by solo programmers. But research published in 2001 suggested there are other reasons businesses might want to encourage coders to work together: backing up institutional knowledge and limiting the negotiating power of individual employees.

As the study put it: "The risk from losing key programmers is reduced, because there are multiple people familiar with each part of the system."

GitHub developer Nathan Sobo in a blog post said users might want to use Teletype with some means of voice communication and/or screen sharing. Eventually, he said, Teletype may be adapted to incorporate such features, which sounds about as concrete as Microsoft's plans.

Finally, if you're feeling left out as a Visual Studio user, Redmond has emitted the free-to-use Microsoft Visual Studio Tools for AI to help folks develop, test and run machine-learning algorithms and plug into Azure Machine Learning. ®