'Dream Chaser' is signed up for ISS re-supply six missions 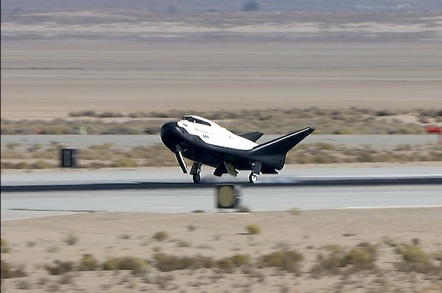 The Dream Chaser touches down at Edwards Air Force Base. Image: NASA

The vehicle looks a lot like NASA's Space Shuttle and like that vehicle can land on a runway. It's rather smaller, however, and at just nine metres long is designed to fit atop lots of launch vehicles and to carry crew and cargo to the International Space Station (ISS), then back again.

Dream Chaser is a “lifting body” spaceplane, which means its body creates lift. That's a useful quality for a craft like the Dream Chaser that is expected to survive fifteen or more re-entries, because if it can generate lift without needing large wings the resulting design is simpler and more robust.

The design also means that the Dream Chaser can return to terra firma while encountering just 1.5 times Earth gravity. That gentle ride, compared to other vehicles, mean that craft is a candidate for return of sensitive payloads like fragile experiments or injured crew.

SNC is proud to announce the Dream Chaser® spacecraft had a successful free-flight test today @EdwardsAFB, with support of @NASAArmstrong. The Dream Chaser had a beautiful flight and landing! pic.twitter.com/lAn0n7FPsg

The Register understands that the craft was released at 10,000 feet and Sierra Nevada promises more data about the flight on Monday, US time.

Sierra Nevada has a contract to fly half a dozen missions to and from the ISS before the year 2024, but the Dream Chaser hasn't flown a test for four years. Hence the importance of Sunday’s drop from a helicopter and subsequent glide and landing.

NASA says the flight met “expected models for a future return from the International Space Station.” The Dream Chaser is therefore felt to be on track for a 2020 launch. ®