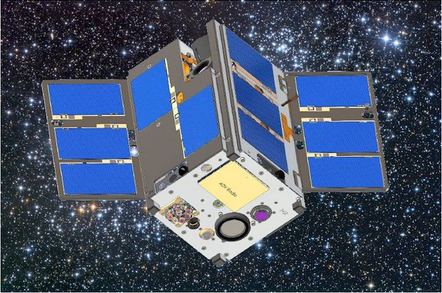 Orbital ATK will on Saturday* launch a Cygnus spacecraft on a supply mission to the International Space Station, with one of its payloads being a pair of CubeSats that NASA hopes can demonstrate 200 megabits per second downloads, from space, and how small satellites can be operated in harness to build networks or complex machines.

Known as the Optical Communications and Sensor Demonstration (OCSD) experiment, this effort commenced in October 2015 when a single 1.5-unit (1.5U) CubeSat went aloft to test designs of the two sats going up this Saturday.

The new birds carry a laser that NASA explains is “hard-mounted to the spacecraft body”. Establishing a connection from one sat to the other, or to a ground station, therefore requires a change to “the orientation of the entire spacecraft.”

To make that happen, the two CubeSats carry water as a fuel – it's vented as steam to shunt them about.

The sats do far more than point and shoot data.

“In addition to laser communications, the two satellites perform proximity operations, which involve manoeuvring the two satellites relative to one another using variable drag and propulsion,” NASA says. “Relative position measurements between the two satellites use cameras, beacons, and laser rangefinders.” There's also “a pair of miniature star trackers, which point to an accuracy of 0.05 degrees.”

The CubeSats are therefore an experiment in navigation and manoeuvrability, as the mission plan calls for the two to start out 2km apart and then be brought to within 200m of each other.

This is significant because NASA says it's never before achieved relative position measurement between two small satellites. If it can do so, it can get small sats in position to help others, or larger sats, by flying networking capabilities to where they're needed.

“Capabilities in proximity operations will enable multiple small spacecraft to operate cooperatively during science or exploration missions, to approach another spacecraft or object for in-space observation or servicing, or to connect small spacecraft together to form larger systems or networks in space,” NASA says.

This mission will test a downlink to a ground station at 5Mbits/s to 200Mbits/s. If the sats can hit the higher speed, NASA says (PDF) the resulting data flow will be “a factor of 100 increase over current high-end CubeSat communications systems.”

Better yet, NASA says “relatively simple upgrades, primarily to the attitude control system, will enable download rates of 2.5 gigabits per second (Gb/s) or higher. This would open the possibility of using small satellites in applications, such as synthetic aperture radar or hyperspectral Earth imaging, that produce volumes of data far beyond the capacity of radio-frequency downlink systems.”

NASA also imagines using such CubeSats “as data relay nodes in low-Earth orbit; a modest constellation of small satellites has the potential to provide low-latency, high-rate communications as a service for other satellites in orbit around Earth.”

So let's keep our fingers crossed for fair weather that allows Orbital ATK's Cygnus and its precious payloads to ascend safely on Saturday! ®

*If all goes well!