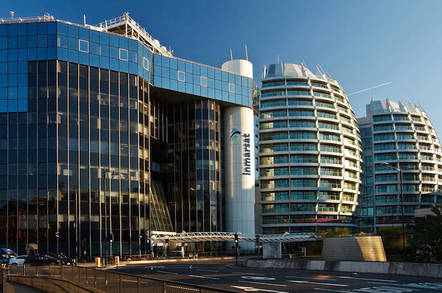 Brit satellite biz Inmarsat has doubled its statutory profits and grown its revenues, thanks mainly to its in-flight Wi-Fi offerings.

Lufthansa installed Inmarsat’s GX in-flight Wi-Fi product on 141 of its aircraft, along with a flurry of Asian low-cost carriers including Air Asia. A total of 1,300 airliners now have Inmarsat’s onboard satellite Wi-Fi installed, with an “active pipeline” of 3,000 more aircraft due to have it added.

The EU Aviation Network ground-and-air in-flight broadband system, which is the subject of various legal challenges by satellite connectivity rival ViaSat, has completed its “successful flight trials over recent months”, according to Inmarsat, and the company has secured regulatory approval in all 28 EU countries to start operating the network.

“In addition, 29 countries have now provided authorisations or in-principle approvals for the complementary ground component, including the UK and Germany,” said Inmarsat.

Inmarsat also noted that its machine-to-machine (M2M) revenue ticked up by 9.8 per cent to $4.6m in the quarter, the firm having also announced a deal with Jersey Telecom (JT) to provide satellite-based backhaul for M2M connectivity. The first test of this new network is being carried out in Kigali, Rwanda, using JT SIM cards.

M2M is the term for what we now call Internet of Things connectivity, with the caveat that M2M only applies to GSM-based networking; hence the SIM cards. Vodafone recently announced its V platform, which is SIM-based M2M but operating under the IoT banner for marketing purposes.

Confused? You betcha, especially as old-fashioned M2M was meant to have been ditched in favour of all the new-fangled IoT connectivity standards – which, we were told (by, among others, NB-IoT evangelist Vodafone), would largely do away with custom backhaul deals and the like.

For now, at least, there’s no harm in providing world+dog with fat (or thin) pipes, whether it’s feeding captive airline passengers or sensors in the capital of an East African nation. ®

Remote backhaul for rural millionaires? Not so, they say

Brussels court (no, not that one) comes up trumps for US biz

Mind you, we still haven't found the wreckage