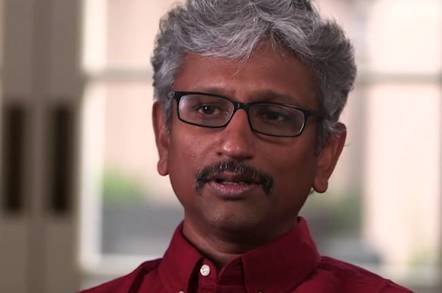 Intel will be making its own discrete graphics cards, and it has hired away the head of AMD's GPU unit to lead the effort.

Raja Koduri will take the title of chief architect and senior veep of Core and Visual Computing, the business unit in charge of Chipzilla's new graphics card line as well as the integrated graphics hardware it develops for its various chipsets. Koduri will start his new job with Intel in December, it was announced on Wednesday.

"With Raja at the helm of our Core and Visual Computing Group, we will add to our portfolio of unmatched capabilities, advance our strategy to lead in computing and graphics, and ultimately be the driving force of the data revolution."

In a string of tweets on Wednesday evening, Koduri said:

Guess it's time for me to come out of my vacation mode briefly and provide an update. First things first - many many thanks to the overwhelming amount of congratulatory and encouraging messages regarding my decision and transition!

I have spent more than two thirds of my adult life with the Radeon team and its community. They have been my extended family. No matter where I go, what I do next those bonds will remain.

It will be a massive understatement to say that I am beyond excited about my new role at Intel. I haven't yet seen anything written that groks the magnitude of what I am pursuing. The scale of it is not even remotely close to what I was doing before. Will say more when ready!

Before he was lured away by Chipzilla, Koduri was AMD's senior veep and chief architect in its Radeon graphics chip wing. He also put in a stint at Apple, helping to develop the Cupertino giant's Retina display line and the Mac's graphics sub-system.

The hiring of Koduri comes as Intel and AMD seem to have formed an uneasy truce, on the GPU side at least, after years of battling in the x86 CPU market. Earlier this week the two announced a partnership that will see Intel package AMD's Radeon graphics hardware with its own processor chipsets.

Both that deal and the creation of the new business unit can be seen as shots across the bow of arch-rival GPU card designer Nvidia. Intel's long-time graphics partner has incurred Chipzilla's wrath of late as it increasingly pushes into the AI world that Intel desperately covets.

Nvidia, which already competes with AMD in the discrete graphics space, will now also have to deal with the looming figure of Intel. ®