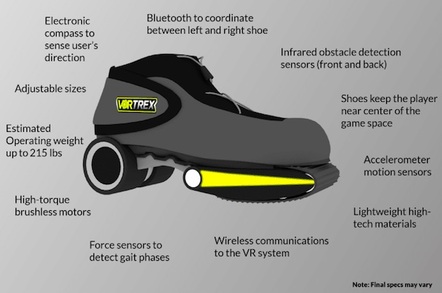 Former Mythbuster Jamie Hyneman is seeking US$50,000 to build a prototype pair of roller skates to wear in virtual reality.

Hyneman's pitch video points out that when one straps on goggles and gloves to enter virtual reality, your eyes are occupied and you therefore run the risk of bumping into stuff if you try to walk in meatspace while simulating walking in a virtual world. And bumping into stuff is dangerous.

Previous attempts to sort this out have involved harnesses or slippery surfaces, but Hyneman and his collaborators now think “Vortrex Shoes” are a better answer.

The electrified footwear will have wheels under the heel and a track under the ball of the foot. The track will move backwards, so that as you step out in VR you experience the sensation of walking without actually going anywhere as the shoes propel you backwards. Hyneman suggests wearers will effectively moonwalk like Michael Jackson.

The $50k Hyneman seeks will be used to make a prototype that delivers a production-ready prototype, building on 30 years of his previous footling with experimental versions of moving moccasins.

If all goes well, the team imagines it might be able to adapt the shoes for transportation applications, in addition to the first intended market of VR gaming.

Backers will score some Hyneman-themed survivalist schwag, plus a ticket to the head of the queue to buy the shoes if they make it into production.

That probably won't be until late 2018 or early 2019, when it's envisioned the shoes will ship in adjustable small, medium and large sizes that will cover US shoe sizes 5 to 13. The team promises it will also pen drivers to ensure the shoes get a walk-up start with gaming consoles.

The team behind the shoes acknowledges they have many technical issues to overcome. The Register thinks they may have reputational worries too: speculative fiction author Neal Stephenson helmed a crowdfunded effort to improve the verisimilitude of sword-fighting games with a simulated blade. The project wasn't as clear as Hyneman's about funding a prototype, so disappointed some backers. It also didn't succeed, which was also an irritant to some who'd stumped up cash. ®

Not enough eyeballs in goggles to justify in-house production