Thought the Snowden leaks would make things better? Joke's on you 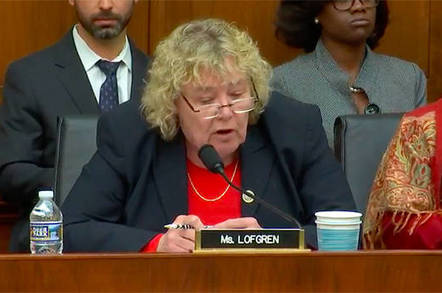 Representative Lofgren is not approved

A draft law protecting one of the US government's spying programs has passed through the initial markup stage in the Congress, providing one more opportunity to witness the "up is down" world in which American politics currently resides.

The USA Liberty Act put forward by House Judiciary Committee chairman Bob Goodlatte (R-VA) is notable in that it does the complete opposite of what it claims to.

The act would reauthorize Section 702 of the Foreign Intelligence Surveillance Act (FISA) – which allows American snoops to scour communications for information on specific foreign targets.

But the current proposal would in fact create a permanent domestic spying program – not a foreign one – and put in place legal protections for the FBI to continue running a surveillance program that it claims doesn't exist but does.

The law would provide permanent access to a vast database on US citizens that the intelligence community says doesn't exist but does.

It would effectively write into law a series of highly dubious and largely secret legal interpretations developed by the US intelligence services to grant themselves access to highly sensitive data collected on American citizens.

And the proposal purposefully fails to define key terms like "query" in order to maintain the fiction that the program is legal when it would almost certainly be deemed unconstitutional if it were put in front of a court.

Into this ludicrous situation came the House Judiciary Committee whose members proceeded today to make a long series of incorrect statements on the public record in order to justify their support of the law.

Among the many statements that were instantly picked apart by online observers was Goodlatte's own suggestion that the Section 702 database is not segregated from the other FBI databases – when the FBI's own filing said it is.

Later, while shooting down an amendment that would introduce safeguards to the program and help identify any abuses, Goodlatte claimed that there had never been any abuses of the current program: something that is of course impossible to know since there is no system that can identify them – which was the point of the amendment in the first place.

A number of representatives claimed that Section 702 data has been approved for use in criminal investigations – in order to justify the "exemptions" that would give the FBI constant access to the database. Whether they actually believe that to be true is unclear but what is clear is that the use of the data for that purpose has never been approved by a court: it was simply asserted by the intelligence services.

Congressman Jim Sensenbrenner (R-WI) and Jerrold Nadler (D-NY) asserted that there no need for a warrant to access information if it was a matter of national security – in order to push back on efforts to force the FBI to go through additional legal processes before search for information on US citizens. Again, this is a wildly misleading interpretation of the law and another sign of how the intelligence services will squeeze everything they can into the slightest hole in the law.

Representative Goodlatte argued that requiring the FBI to get a warrant to search the Section 702 database would be an unnecessary "burden" on the FBI – and then immediately spoke in defense of the Fourth Amendment, which many legal scholars feel strongly requires the FBI to get that warrant.

Over the course of the hearing, in order to avoid any restrictions being placed on the FBI, congressmen found themselves in the position of claiming that the Federal Bureau of Investigation is unable to figure out whether an individual is a US citizen even if they have their mobile phone number, license plate and zip code.

And on it went, with a core group of representatives shooting down any effort to introduce changes to the current wording. Even a proposal to require the director of national intelligence to confidentially inform the "gang of eight" of congressional leaders overseeing intelligence operations of future efforts to interfere with US elections gathered through Section 702 was dismissed as "partisan".