This could be our favorite gadget of 2017: A portable projector

The XGIMI CC Aurora is, frankly, outstanding. But a little buggy 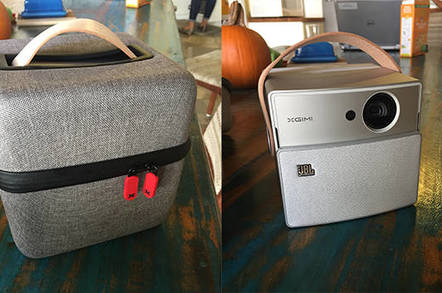 Review Every now and again in the world of gadgets there is a confluence of technologies that make something new possible. A better take on a familiar task.

This is hardly the first portable projector: teachers and salespeople have been carrying them around for decades. It's not even the first consumer effort: the market is awash with small boxes you plug into your smartphone or laptop, and which send up moving images onto any nearby wall.

But the Aurora is the first that made us sit up and think: actually that could be really useful. It's not a gimmick. And it's not so serious that it's for pros only. In the same way that people never really considered walking about with their music in their pocket – rather than in their car or on a home stereo – when the Walkman emerged, so this little stylish projector makes you wonder why you only share a big screen at your home or in a cinema.

Somewhat oddly, your humble Reg vulture found himself wandering around with the Aurora, sometimes just for the hell of it. Put in on the floor at the end of the hall and watch a music video on the wall; stick it in the lounge and play a YouTube clip; sit outside and project onto the side of the house.

The reason this thought even occurs is thanks to a confluence of little things. The first, and most important, are size, battery and sound.

The projector comes in a 6.5-inch stylish gray cube with the projector's own leather handle poking out the top to make it portable. Unzip this container to pull the projector out. It weighs about 4.4lb (2kg) but feels lighter. You could happily carry it around all day. The actual projector is a five-inch cube – and it packs a lot in.

The battery, for example. Like a laptop, you can have enough confidence in it to just fire it up and worry about plugging it in later. The little box is not going to last a whole day but we got a few hours out of it. It will last a whole movie. The specs say it can last up to four hours.

But the sound is remarkable. It's easy to forget how bad portable speakers used to be. Now we have Sonos and Amazon Echo and Google Home – even iPads – producing really quite impressive sound. The Aurora does the same, and doesn't distort even when at its highest levels (JBL speakers, apparently).

The fact that that sound comes out at the same time as a high-resolution picture is what makes it exciting. How many hundreds of times have we been subject to a laptop plugged into a projector, with poor picture quality and even worse sound? Not any more.

Which leads, of course, to the actual image projected. And it is impressively good. It is 720p – so high resolution for a portable on a reasonable budget. And the tiny box puts out an extraordinary amount of light. It works pretty well in anything but direct sunlight. And it has a very pleasant auto-focus so you can literally just stick it down on any surface and be off and running in seconds. It can project an 180-inch-wide image at a distance of about 14ft (four metres).

And it is the embrace of smartphone technology that makes the Aurora feel like a step forward; a gadget that does something new and useful.

The projector can talk over Wi-Fi, is powered by GMUI on Android 5.1.1, has 16GB of internal storage, and comes with an application store. So as well as the YouTube app, web browser and file manager that comes as standard, you can grab your favorite friends: Netflix, Pandora, HBO Go, and so on. And start playing them on a wall... possibly, but more on that later.

It also supports all the usual streaming standards: Bluetooth, Miracast, DLNA, and Apple's Airplay. And it has two USB ports and an HDMI socket in the back. So you should be able to play video or music using pretty much any modern device. There's also a 3.5mm audio output jack if you want to stick on some headphones or external speakers. Diving deeper, it has 1GB of RAM, and an dual-core 64-bit 1.5GHz ARM Cortex-A53 system-on-chip processor from MStar with a Mali GPU.

This opens up a wealth of possibilities. Maybe you decide to have a spontaneous movie screening outside. Or you need to give a presentation to a client and the setup in the room is a disaster. Or you want to share a video with friends but rather than crowd round your phone, you just pull out your little cube.

We did a test with a Powerpoint presentation on a USB stick and assumed walking cold into a new room. How long until you could get it setup and running? We did it in two minutes – and that included adjusting the screen to appear perfectly square on the wall.

One evening, rather than watch a clip of Stephen Colbert on a smartphone, we simply pushed open the projector cover, turning it on automatically, and streamed the video on the kitchen wall. It took less than 30 seconds. And both the picture and the sound were better. Another time, this reviewer found himself absentmindedly scouring the news through a news app, having completely forgotten that it was being projected onto a bedroom wall.

So that's all the good stuff. What's the bad?

Well, the hardware is there. In fact, it is amazing how much hardware is packed into it. But the software is not. We held off writing this review for two weeks because we found so many bugs in version 1.0 that the manufacturer promised to have them fixed swiftly. For one, app installation wasn't working – which severely limited its potential.

A 500MB download and install later and version 1.1 has fixed most of the problems. But definitely not all. For example, while we now have Netflix available at the click of a button, it doesn't work – the picture won't stream. The likely reason as to why came when trying to stream from the downloaded HBO GO app: it thought we were in Romania – and displayed a message in Romanian letting us know that its service wasn't available in our country.

Next page: Not all fixed
Page:
Tips and corrections
111 Comments