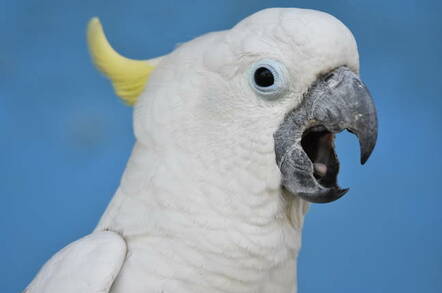 nbn™, the company building and operating the NBN, has revealed that “native parrots have recently been found feasting on spare power and fibre cables strung from NBN Co's near 2,000 Fixed-Wireless towers”.

The company has used a picture of a sulphur-crested cockatoo to illustrate its announcement. The species is infamous for trashing anything it decides to have a go at. A flock can strip a tree in a couple of hours, either to find food or to hone their murderous beaks.

It's therefore unsurprising that the birds have taken to cables.

nbn™'s oversight on its spare cables has so far seen eight damaged sites and a repair bill of AU$80,000. The company thinks another 200 sites may have been bitten which, given costs of the network have already blown out by AU$20bn over previous estimates, is an unwelcome extra expense.

The company is therefore installing plastic boxes to house the spare cables and repel the winged menaces, at a cost of $14 apiece. ®

As the bird was young, this task needed doing three times a day, or more often if it started screaming. This happened in-between all the other cleaning of poop, dredging up of dead fish, and being bitten by smaller parrots as I shoved them into boxes so that customers could take them home. I wore a thick leather glove to catch the beasts and their beaks could easily inflict pain even through that barrier. Such fond memories!