Not as fast as your first time, though, let's be honest 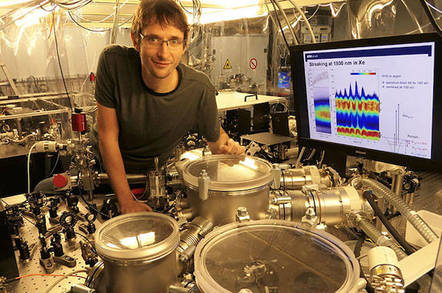 Physicists have whittled down the world’s shortest laser pulse to just 43 attoseconds (4.3 x 10-17 seconds), fast enough to observe electrons moving during chemical reactions in slow motion for the first time.

The blip “is the shortest controlled event that has ever been created by humans,” the boffins bragged. The infinitesimal flutter beat previous records of 67 attoseconds held by a team of eggheads from the University of Central Florida, in the USA, and the Chinese National University of Defense Technology, in 2012, and the 2017 53-attosecond Florida screamer.

A paper, published in the journal Optics Express this month and written by researchers from ETH Zurich in Switzerland, describes how the sci-fi spittle was created. Simply put, neon and argon gas molecules were excited by an infrared laser to emit soft X-ray photons directed at phosphorus and sulphur.

This extremely brief illumination allowed the team, led by ETH Prof Hans Jakob Wörner, to directly observe how the electrons in molecules of the two aforementioned substances – both elements common in biochemical reactions – move when excited. The multi-attosecond pulses covered a bandwidth of approximately 100eV and reached energies of up to 180eV.

By generating pulses that last less than 50 attoseconds, the researchers effectively found a better way to snapshot chemical reactions in slow-mo, or in greater detail, in other words. This technology, and the resulting insight, could be used to develop more efficient solar panels as scientists can now track, in single step, how electrons are excited by sunlight, basically.

"Attosecond spectroscopy could contribute to the development of more efficient solar cells since now, for the first time, it is possible to follow the process of excitation through sunlight up to the generation of electricity step by step," explained ETH spokesman and chemistry PhD Joachim Schnabl. "A detailed understanding of the charge transfer pathway could help optimize the efficiency of the next generation of photosensitive elements."

The team also hopes that the ultra-mega-super-fast laser can be used to manipulate chemical reactions as well as observing them. The photons emitted from the experiment may be able to target and break specific chemical bonds to control reactions now that brainiacs can reach dizzying speeds matching electron movement in molecules.

"Chemical reactions can be directly manipulated," Schnabl added. "A laser pulse can alter the course of a reaction – even chemical bonds can be broken by stopping the charge shift at a certain location in the molecule. Such targeted interventions in chemical reactions have not been possible until now, since the time scale of electron movement in molecules was previously unreached." ®