Code not finished or properly tested, lack of staff, and more, Senate warned 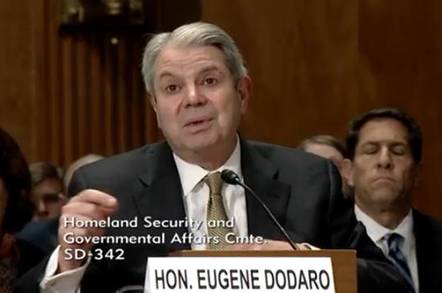 Warning ... Eugene Dodaro speaking at a Senate hearing on Tuesday

Analysis In 2020, America will run its once-a-decade national census, but the results may not reflect reality if hackers manage to have their way.

On Tuesday, the US Senate Homeland Security and Governmental Affairs Committee heard that the 2020 census will be the first to make extensive use of electronic equipment. For example, census workers will be given tablets to interview people who can't be bothered filling in and sending back their forms.

Crucially, the US Census Bureau must patch vulnerabilities and install strong defenses in the computer systems it has set up to find and tabulate American citizens. With less than three years to go, a little more hustle in that department is needed, it seems.

A draft US law to secure election computers that isn't braindead. Well, I'm stunned! I gotta lie down

"The bureau has not addressed several security risks and challenges to secure its systems and data, including making certain that security assessments are completed in a timely manner and that risks are at an acceptable level," Eugene Dodaro, the US Comptroller General, said in a statement read out during the Senate hearing.

"It is important that the bureau quickly address these challenges."

Previously, the census was recorded by mailing paper forms to every household in the country, and then dispatching data collectors to quiz citizens who don’t return their completed paperwork. Dodaro reported that "because the nation’s population is growing larger, more diverse, and more reluctant to participate," response rates were at an historic low: just 63 per cent of households replied by mail in 2010 compared to 78 per cent in 1970.

As a result, the bureau had to recruit a load of temporary workers to manually obtain people's details. After the 2010 census, someone had the bright idea to make the process more electronic, with workers using fondleslabs to input data.

This was billed as a cost-saving measure but those familiar with large IT projects can see where this is going. The 2010 census cost $12.3bn to carry out, up 31 per cent on the 2000 poll, and the 2020 exercise is expected to cost $15.6bn, and costs may yet rise higher.

Part of the reason for the massive cost increase is the aforementioned use of handheld electronic devices by workers. The data collectors were supposed to use their own phones when out in the field, but this was scrapped once someone, thankfully, thought through the security and compatibility implications.

Dodaro said the US Government Accountability Office has identified 43 electronic systems that are to be used in the 2020 census. None have undergone the required security certification – and one, the code used to tabulate all the data, won’t even finish development until March 2019 at the earliest. Any assessment and debugging of this software will be rather last minute.

As a result, the GAO has declared the Census Bureau a "high-risk agency," and wants to conduct a thorough test of all its systems next year. However, some of the electronic systems won’t be ready by then, and those that are ready are already showing problems, and most haven't undergone penetration testing.

For example, testing this year in three regions of the country revealed problems in transmitting addresses and maps to workers' devices, and, in seven cases, information was accidentally deleted from the slabs. Census collectors also found problems with cellphone coverage that meant they had to drive to the nearest town to file their results.

The situation is complicated further by staffing turmoil within the bureau. The head of the agency resigned shortly after Trump was elected, and Dodaro reported that as of October last year 60 per cent of positions at the bureau were unfilled.

Add into this the experience in online censuses from Down Under. Last year the Australian census, which was also trialing an IT-heavy approach to gathering data, was taken offline when a distributed-denial-of-service attack knocked down servers.

The other concern is that the data could be manipulated by hackers unknown. And the US census data is vital not only for government planners but also for the politics of the republic itself.

Census data is used to determine congressional districts for voting by assessing how many people live in a certain area. It is also used to devise education and public sector funding so that the needs of the population can be met.

Dodaro said the GAO is keeping a close eye on the systems and will be conducting further security testing – if the code is ready to do so. He said he was hopeful the system could be made secure, but we're all heard that before. ®

Australian Bureau of Statistics to get AU$250m tech boost