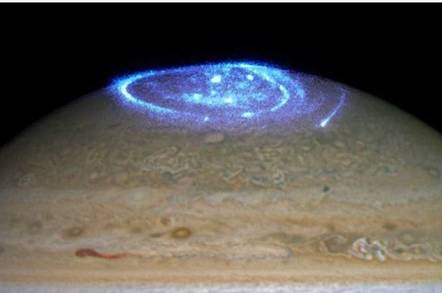 Flash, aaa-ahhh ... An aurora on one of Jupiter's poles

Jupiter’s vivid northern and southern lights flash independently from each other, a discovery that has surprised scientists.

The results published in Nature Astronomy on Monday reveal that the gas giant’s x-ray emissions are erratic at its north pole; the swirling patterns of light continuously brighten and dim over time. But at the south pole, the lights pulse steadily every eleven minutes.

William Dunn, lead author of the paper and a researcher at University College London and the Harvard-Smithsonian Center for Astrophysics, said: “We didn't expect to see Jupiter's X-ray hot spots pulsing independently as we thought their activity would be coordinated through the planet's magnetic field."

Unlike Jupiter, the activity on Earth’s northern and southern lights are pretty similar and approximately mirror each other. Not so on our neighboring gas giant.

The dazzling glow of auroras are generated when a barrage of charged particles from the solar wind are swept into the upper atmosphere along a planet’s magnetic field lines. The particles collide with ions in the atmosphere, and the extra energy excites the atoms, which is eventually emitted as electromagnetic radiation, producing the lights seen in auroras.

One theory that could explain why Jupiter’s northern and southern lights form independently is that its vibrating magnetic field lines produce waves that alter the speed and direction of the charged particles.

The trajectories for the particles travelling to the opposite ends are different, and enter the planet’s atmosphere at various times, where they smash into the ions there to produce light at distinct times.

The auroras on Jupiter are particularly strong, generating high-energy x-ray radiation. The team used data taken from the European Space Agency’s XMM-Newton and NASA’s Chandra x-ray observatories to produce maps of Jupiter’s x-ray emissions and found hot spots where the radiation was concentrated at each pole.

The size of each hot spot is larger than the surface area of the Earth, and each have different characteristics and properties.The northern hotspot is produced by ions emitting energy of tens of mega-electronvolts. Licia Ray, co-author of the paper and a researcher at lecturer at Lancaster University, said that the exact nature of the emissions remains to be understood.

"The behaviour of Jupiter's X-ray hot spots raises important questions about what processes produce these auroras. We know that a combination of solar wind ions and ions of oxygen and sulphur, originally from volcanic explosions from Jupiter's moon, Io, are involved. However, their relative importance in producing the X-ray emissions is unclear," Ray explained.

The data taken from this study was from May to June 2016 and March 2007, and researchers aren't sure if the behavior observed during those times is common or unique.

"If we can start to connect the X-ray signatures with the physical processes that produce them, then we can use those signatures to understand other bodies across the Universe such as brown dwarfs, exoplanets or maybe even neutron stars,” said Dunn. ®