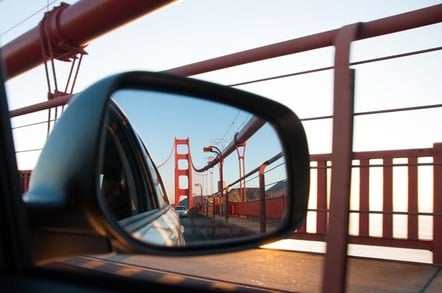 Wow, what a pretty bridge to look at with this handy viewing portal!

Google binned its self-driving cars' "take over now, human!" feature because test drivers kept dozing off behind the wheel instead of watching the road, according to reports.

"What we found was pretty scary," Google Waymo's boss John Krafcik told Reuters reporters during a recent media tour of a Waymo testing facility. "It's hard to take over because they have lost contextual awareness."

Krafcik said the driverless cars' human supervisors were goofing off on their phones, putting on makeup and even catching forty winks.

Google decided that its human-intervention system was unsafe as a result of these 2013 findings, which it uncovered by watching video footage from inside cars fitted with test versions of the system.

Since then, said Reuters, Google Waymo has focused on technology that does not require human intervention.

The company is embroiled in an ongoing lawsuit against taxi app biz Uber, which is developing driverless car technology in order to compete with Waymo. ®