Can a dancing hot dog save it? 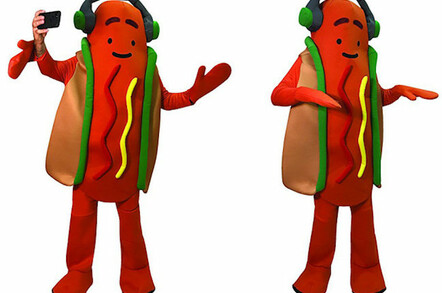 Comment Although Snap Inc. still insists on its home page that it's "a camera company", nobody seems to want its "camera". The core user base of millennials have stayed away from its hardware foray, resulting in an expensive flop.

The social network for yoof rebranded itself in the build-up to its IPO in March. Being a social network emphasised the risk of being crushed by Facebook. But a camera company allowed for a new spin. "The marketing is moving more towards images and pictures rather than text," Nenad Marovac, founder of DN Capital told Newsnight. A year ago the company launched Spectacles, low-cost ($129) nerd goggles that captured brief 10-second video clips, recorded in a circular image. The Spectacles were initially sold through vending machines.

However, the company is now stuck with "hundreds of thousands of unsold units sitting in warehouses, either fully assembled or in part", according to The Information. Estimating that the number is 250,000, that's over $30m worth of stock. Another report suggests that half of Spectacles owners stopped using them after a month.

There are several lessons from this. One is that you can trust very few reviewers, especially if a product has the cachet of yoof appeal. Tech porn blog The Verge described the specs as "fun that's totally worth the trouble". But when we examine what the trouble actually entailed, it's difficult to see how anyone could reach this conclusion. The glasses had to be paired to Snapchat. Data transfers were very slow and the Spectacles rapidly ran out of battery. Even Snapchat addicts – "some of the most plugged in and digitally aware people on earth," according to a BBC executive – weren't impressed.

Perhaps an AR version will be more successful, the company hopes.

"Our dancing hot dog is most likely the world's first augmented reality superstar," said CEO Evan Spiegel in August's investor call. He was referring to an AR overlay that has been viewed 1.5 billion times. That doesn't readily translate to revenue, but this month the company started to sell $79.99 dancing hot dog costumes on Amazon.

You can judge for yourselves.

Then again, by the time the AR ecosystem is mature, and the technology cheap enough to embed in spectacles, Snap Inc. might not be around to take advantage of it. The social network's features were rapidly copied by Facebook and the stock is now trading at half of its IPO price of $24.

Snap: We've blown $3bn this year and Tencent wants to give us more

Shut up and take my money!