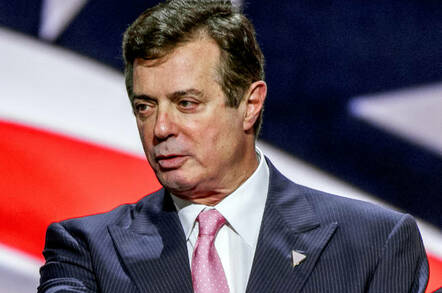 Analysis Where to begin?

Former Trump foreign policy advisor George Papadopoulos – no, not that one – has been turned by ex-FBI director Robert Mueller as part of the latter's investigation into Trump campaign team members. Mueller is probing allegations of obstruction of justice, money laundering and other financial crimes, and collusion with Russian government agents seeking to meddle with last year's US presidential election.

Papadopoulos has been assisting Mueller's special inquiry for several months, but word of this cooperation only emerged today when his guilty plea to making false statements to the FBI was unsealed.

Coincidentally, Trump's former campaign manager Paul Manafort surrendered himself this morning to Mueller at his nearest FBI office, as requested, to answer allegations ranging from making false statements to acting as a foreign agent.

Ex-Trump campaign official Rick Gates, also accused of conspiracy and money laundering, handed himself in today, too. The indictment against the pair is here, and both deny any wrongdoing.

Among the wealth of details in Papadopoulos' 14-page statement [PDF] is the fact that he used Facebook Messenger and Skype to communicate with a Russian government agent, called "the Professor," who promised to provide damaging information on the Clinton campaign. Emails, no less.

And then there is extensive evidence – confirmed by Papadopoulos – that he acted as a go-between for the Trump campaign and the Russian government, including being supplied with damaging information on the Clinton campaign.

There are also emails from other Trump campaign staff – so far unnamed – that show explicit efforts to work with Russians in gathering damaging information on the real-estate tycoon's political rival. In other words, efforts to engage a foreign power to swing a US presidential election.

For one, using Facebook to carry out highly dubious and potentially illegal activity is not a good idea. This is a social network that periodically changes account settings to keep up the pretense that it's not gathering and selling every snippet of information it can get out of you. Anything you say on Facebook may go straight down a pipe to the NSA and a database searchable by the FBI. It's called Section 702.

Papadopoulos is obviously not a man well versed in spy craft. Something that becomes more apparent when it's revealed the day after he was pulled in for questioning, he deleted his entire Facebook account and started a new one. He also tried changing his phone number to sidestep the Feds.

You can just imagine Mueller's team at their morning meeting: so how did the Papadopoulos interview go yesterday? Well, this morning he deleted his Facebook account. Great, now we know where to look.

Trump lieutenants 'use private email' for govt work... but who'd make a big deal out of that?

Oh dear. It didn't help either that Papadopoulous' Facebook posts undermined numerous parts of his story. Papadopoulos told federal investigators in January this year he had met the Russian agents before joining the Trump campaign. Unfortunately, what he actually wrote on Facebook somewhat undermined his own account. Hoisted by his own petard, as they say.

Which leads us to the social medium of choice of the current US President: Twitter.

Trump's son-in-law – and the man who we have no doubt will succeed in his task of creating peace in the Middle East – Jared Kushner was thought to have followed Papadopoulos' lead, and deleted all of his tweets to destroy any evidence against him.

However, Kushner has virtually never used Twitter, hence the lack of tweets on his profile. That means, of course, he's had nothing to say about the meeting he had with Russian agents that was only about adopting babies and nothing else, and certainly nothing about that promise of evidence, from the Russian government, that one of the Clinton campaign's backers was a tax evader.

And, clearly, he had nothing interesting to say about the meetings he kept remembering he held with Russians, which forced him to repeatedly revise his security clearance forms.

As well as Kushner's wall of silence, a Trump confidante, meanwhile, has been silenced: Roger Stone.

Even Roger Stone doesn't like Roger Stone, but it seems he finally crossed the line this weekend in a series of personally abusive tweets aimed at journalists reporting on the Mueller-Russia probe, and has been permanently banned from the website, joining such luminaries as Milo Yiannopoulos and Martin Shkreli.

CNN host Don Lemon "must be confronted, humiliated, mocked and punished," Stone guffed on Twitter before being barred from the milliblogging service. Conservative pundit Bill Kristol was #porky and "pilling on the pounds." CNN host Jack Tapper "must be held accountable for his lies and very severely punished." And so on.

Of course, Stone took the opportunity of again being highlighted as a dreadful human being to try to get himself talked about. "This is just part and parcel of the tech left's effort to silence conservative voices," he blathered and then launched a campaign to get himself reinstated while also promoting a movie all about himself. And so on.

Which of course leads to Trump himself.

"Today’s indictments against Mr Manafort, Mr Gates and Mr Papadopoulos are stark reminders of how the special counsel’s investigation is critical to the rule of law and our national security," US Senator Ron Wyden (D-OR) told El Reg in a statement.

"The allegations against Mr Papadopolous come after previously confirmed ties between the Trump campaign and the Russians, and raise more questions about which campaign officials may have encouraged the expansion of these connections. The indictment against Mr Manafort and Mr. Gates confirm the importance of following illicit money trails wherever they may lead, including to pro-Russian Ukranian interests.

"Each of these allegations should be the subject of thorough investigation by Congress as well as the special counsel. Finally, the tax evasion and money laundering charges against Mr Manafort are a reminder that Donald Trump, in contravention of decades of bipartisan practice, still has not released his own taxes."

The epitome of the man who can't sit on a train without calling someone to tell them they're on a train. Who can't eat a hamburger without tweeting "I am NOT eating a hamburger." The hulking id with the irrepressible ego.

Well, Trump turned to Twitter to confirm everything that everyone was saying about him – only he put the name "Hillary" in front of it all because that's how deception works. "Never seen such Republican ANGER & UNITY as I have concerning the lack of investigation on Clinton…"

"There is so much GUILT by Democrats/Clinton, and now the facts are pouring out. DO SOMETHING!"

Holding down the 'Fort

But at the center of all the discussion is Paul Manafort. His Twitter account is still there, although it's not been used since December last year and he only set it up when he joined the Trump campaign. Manafort doesn't seem to have a Facebook profile to delete. But what he does have is an indictment for a dozen allegations, ranging from money laundering to filing false reports, to false statements, to acting as an agent for a foreign principal, to "conspiracy against the United States." None of which sound good.

And just to add a cherry to the top, Robert Mueller has asked for forfeiture on Manafort's assets, including his house in the Hamptons (worth about $8m), his Brooklyn house ($4.5m) and his New York apartment ($3m) – which, it turns out, he placed on Airbnb and was charging thousands of dollars a week to rent out.

The homes were bought from the proceeds of money laundering, the indictment claims – which, surprisingly, is not a new claim. The Treasury Department in August said it was looking into all-cash purchases of New York real estate for possible money laundering.

When it comes to technology and social media is of course the man behind the entire investigation, Robert Mueller, who doesn't give one iota of a shit about the swirling social media yelling that passes for modern political debate.

Twitter, Facebook, Skype: they are all wonderful sources of evidence. And today we have seen the first 45 pages of that evidence. More are sure to come. ®

PS: 126 million Facebook users, rather than just 10 million, may have seen content produced and circulated by Russian operatives during the 2016 White House race, it emerged on Monday. And Twitter now says 2,752 accounts accounts were run by Russian agents, rather than the 201 figure it previously estimated.