DXC: Hands up in customer support – who wants redundo? 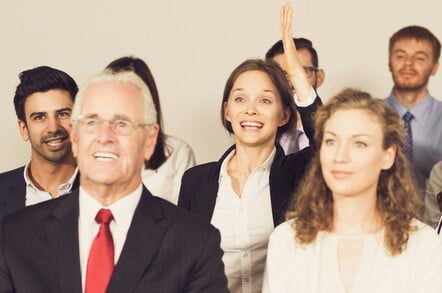 DXC Technologies is seeking volunteers in customer support teams to strap themselves to the redundancy cannon as the process of shipping jobs out of higher wage locations and into cheaper ones continues.

Peter Hands, the Frankenfirm’s UK and Ireland veep of the "deliver" unit, issued a memo to staff yesterday that was seen by The Reg.

“Following on from the work we have done in previous quarters, the UK business must continue to play its part in driving efficiencies whilst delivering on the commitments to grow our business and improve margins.”

Hands said that “prior to commencing formal collective consultations” with the UK Works Council, the UK Employee Forum and Trade Unions, DXC wanted to offer a voluntary redundancy option to staff.

The units offered the chance to leave with a cheque include the "Restricted and Commercial Global Delivery Network" teams, and the "Global Project Delivery Organisation".

The Deliver, Insurance, Healthcare, Build, Sell and Corporate functions within DXC are “not in scope at this time”, said Hands, who previously ran Capita’s IT Services business.

The applications for VR could be made from yesterday and will run to the close of business on 1 December. Staffers will be told of their fate on 12 December, which might be a nice early Xmas pressie for them.

No numbers were mentioned in the document, but Hands warned, “Please be aware that we anticipate potential redundancies in the above areas of the business may be required [sic].

“Whilst we hope that we can meet any proposed redundancies in these areas through VR, we may need to move to compulsory redundancies if this cannot be achieved."

A DXC insider said to us, "Another quarter, another round of job cuts."

The source said of the profile of staff being made redundant: "Something to note: These are all UK roles focused on delivery or run for existing accounts. If I was a customer seeing this, I would be asking how DXC plan to support any change, project or even BAU support.

"I wonder how the top customers in the UK feel about losing their delivery resource and having them replaced with offshore 'leveraged' teams after they have already signed up for the service?"

As The Register previously highlighted, DXC is on track to slash overheads by $1bn in its first year of life: real estate consolidation; offshoring and chopping the workforce in the West; clipping staff expenses; and automation are among the actions being taken.

The first rounds of redundancies at DXC came in May and July, when a total of 900 heads were put on the chopping block.

DXC was born in April; it is comprised of CSC and HPE Enterprise Services - two companies locked in a sales and profit decline for years.

CSC was heavily criticised by MP's earlier this year over its relentless job-cutting programme. Government was urged to work with the company to "root out the worst excesses of capitalism".

The name above the door may have changed since then but it is very much business as usual, and many employees are fed up about it. ®

IBM could have made almost all the voluntary redundancies it needed

But... we didn't mean you! Darn it. We'll have to make compulsory layoffs

IBM: About those agreed voluntary redundancies ... we were just kidding

It's enough to send UK staff on 'mental wellbeing days'. Done that? Talk about Big Blue!