Which reseller pleased fatcats today and rhymes with let's mute a centaur? 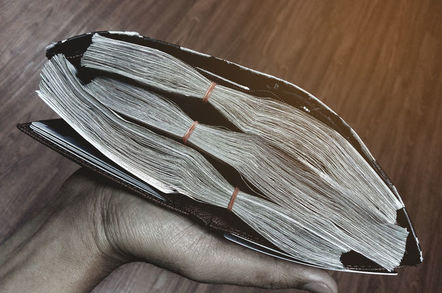 Computacenter – one of Europe’s largest resellers – today reported Q3 financials that are sure to warm the cockles of investors' hearts: sales jumped by a fifth as businesses splashed the cash on tech kit and services.

Total reported turnover for the calendar third quarter ended September jumped 27 per cent to £931m; this was up 20 per cent in constant currency (CC), so the stronger euro helped out in the foreign exchange conversion to GBP.

On this side of the English channel, the UK team pushed up sales by 8 per cent to £335m, propped up by 7 per cent for services including managed and professional, as hardware/software climbed 9 per cent.

The now considerably larger country operation in Germany leaped 40 per cent to £453m (up 26 per cent in CC); fuelled by a 20 per cent hike in services and 50 per cent in product sales.

“A significant percentage, but by no means all, of the supply chain growth comes from one large customer at margins below the group average,” Computacenter noted.

Business in the relatively troubled French wing of the group was up 48 per cent to £127m (up 34 per cent in CC), with product sales surging 54 per cent and services up 26 per cent.

Net funds at the close of quarter were £151.5m, up £54.5m from the year earlier position. "We remain on track to complete the return of value of approximately £100m in the fourth quarter of 2017," the firm said.

This will help to increase the bulge in the wallets of Computacenter founders, Sir Philip Hume and Sir Peter Ogden, who own stakes of 8.8 per cent and 6.5 per cent respectively in the company.

"New technologies, digitisation and our customers' appetite to invest is as buoyant as we can remember, which is obviously driving our professional services and supply chain services," Computacenter stated.

"However, as noted in our 2016 final results, it is also true to say our target market’s desire to reduce operating costs, and therefore the cost of running their IT has intensified which is eroding our contractual services base, thus increasing the need to invest in productivity and innovation to remain competitive," the company added. ®