'Once it was the hot, new model. Not any more' 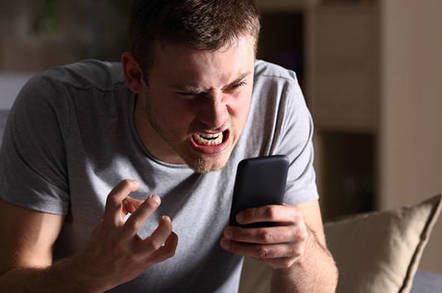 A Sky ad featuring beefcake Tom Hardy has been banned by the UK Advertising Standards Authority for misleadingly suggesting punters could swap their old phone for the latest one every 12 months "free of charge".

The voice-over of the ad, aired in April, stated: "Things can look tired a year on from when you bought them. Like your phone. Once it was the hot, new model. Not any more. That's when you realise you've still got a year on your contract.

"That's a long way to go. But new Sky Mobile lets you swap your old phone for the latest one every 12 months free of charge. So, say hello to a shiny new phone every year with Sky Mobile. Sky. Believe in better."

Under Sky's "Swap" option, after 12 or 24 months customers can choose a brand new phone - a service the TV ad suggested was "free of charge".

However, people complained that claim was misleading because they had to take out a 24-month, interest-free loan with a data plan to receive their new device.

The ASA said it considered consumers were likely to understand the ad to mean that those who were a year into a two-year mobile phone contract with Sky could replace or upgrade their phone without charge or other significant disadvantage.

"However, we considered the need to take out a new, 24-month loan and the possibility of a higher monthly charge with an upgraded phone were pieces of information that customers needed to be aware of before enquiring about the offer, thus needed to be stated clearly and prominently in the ad," it said.

Sky Mobile is a relative newcomer to the mobile virtual network operator space, having gone live in January this year. The firm uses O2's network, with Sky investing £51m to get it off the ground. ®