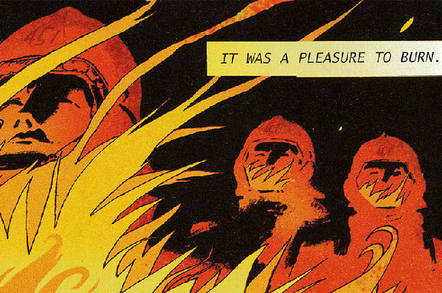 After a long campaign, the Internet Engineering Task Force (IETF) has decided that users deserve to know why pages were blocked and created HTML error 451. Now the body will consider a proposal to extend it to give users more information.

“Error 451” entered the canon in December 2015, with the name honouring Ray Bradbury's “Fahrenheit 451” and a rationale that users deserved to know if legal constraints (such as censorship) were being applied to pages they wished to view.

The original spec provided only minimal information: if used, it would return a status code stating a resource was unavailable for legal reasons, and the response should include a reason.

One Shivan Kaul Sahib now thinks more information is needed, and is asking the IETF to expand the Error 451 with some new protocol elements.

His suggestions in this draft are that the protocol elements include:

The suggestions are the result of an implementation report that's been looking at Error 451 since it was adopted as a standard in February 2016.

That report, published in July 2017, noted that geoblocking was primarily associated with gambling sites.

There's another reason the IETF would consider encouraging the use of 451, and enhancing it: since it's machine readable, it provides a potentially-useful research tool (for example, to answer “how much content is blocked for reasons pertaining to intellectual property rights ?”), and it can be returned by encrypted Web pages. ®