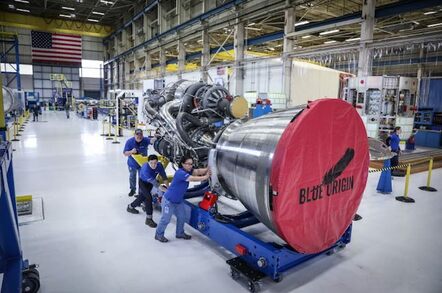 The BE-4 cranks things up to 550,000 pounds from a single engine. By way of comparison, the Merlin engine used in SpaceX's rockets emit 190,000 pounds of thrust. Which is why SpaceX packs nine of them into a single Falcon 9 rocket.

Blue Origin's New Glenn rockets will put seven BE-4 engines in harness for a total 3.85 million lbs of thrust and a payload of 13 metric tons to geostationary transfer orbit or 45 metric tons to low earth orbit. The Falcon 9's payloads to the same spots are 8,300kg and 22,800kg.

Here's the BE-4 in action, during a Friday test that apparently went off without a hitch.

First hotfire of our BE-4 engine is a success #GradatimFerociter pic.twitter.com/xuotdzfDjF

The BE-4's first mission won't be a Blue Origin flight. Instead it's slated to power a Vulcan rocket operated by the United Launch Alliance, a joint venture between Boeing and Lockheed Martin. The company currently operates Atlas and Delta rockets, but is betting Blue Origin can power its next-generation Vulcan by 2019.

The test recorded above suggests that schedule isn't unreasonable.

Blue Origin is also working on the BE-4U, a variant of the engine for in-orbit propulsion.

All versions of the engine run a combination of liquid oxygen and liquefied natural gas, fuels that are easy to acquire and don't require inert gases to enable pressurisation. They also burn clean, which helps Blue Origin to achieve its goal of quick-and-easy re-use of its first stage rockets. ®