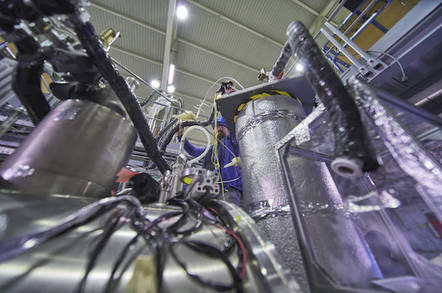 Stefan Ulmer of the BASE collaboration, somewhere behind all that cool kit. Image: CERN, Maximilien Brice and Julien Ordan

One of the outstanding questions in physics is why matter and antimatter didn't wipe each other out at the Big Bang?” A new, hyper-accurate measurement of an antiproton characteristic at CERN leaves that difficult question entirely intact.

Antimatter measurements are always tricky, since you have to keep the antiparticle from interacting with ordinary matter to measure it: any contact with normal matter will destroy both particle and antiparticle.

In the experiment reported last week, the BASE scientists measured antiprotons while they were snared in Penning traps – a mix of magnetic and electrical fields.

CERN wrote: “This new result improves by a factor 350 the precision of the previous measurement and allows to compare matter and antimatter with an unprecedented accuracy.”

As noted in the Nature paper, the new measurement “reaches a fractional precision of 1.5 parts per billion (p.p.b.) at 68 per cent confidence level”.

The problem for the existence of the universe is this:

“The results are consistent with the magnetic moments of the proton and antiproton being equal, with the experimental uncertainty of the new antiproton measurement now significantly smaller than that for protons.”

If there's no asymmetry at all between protons and antiprotons, there's also no good reason any of them survived the Big Bang.

Another interesting aspect of the experiment, according to Symmetry magazine, is that the BASE boffins were able to trap their antiprotons not for seconds or minutes, but for days, and they worked out a technique for swapping antiprotons in and out of the traps as the trapped particles got too hot to measure accurately. ®