Plants in SPAAAAAAACE are good for you 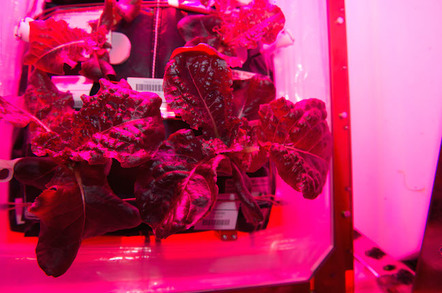 Living in space is grueling. The repetitiveness of daily exercise, experiments, crappy food, and claustrophobia can chip away at an astronaut’s psychological well-being, but scientists have suggested a preventative measure: plants.

The idea of booting plants into space has been around for a while. The first batch of seeds – simple maize seeds – were sent to space by NASA from New Mexico in 1946 atop German-built V-2 rockets (PDF). The first plants successfully sprouted were part of a Soviet mission on the space station Salyut 1 in 1971, where Viktor Patsayev and Vladislav Volkov lovingly tended to flax seeds.

Researchers were curious to see if life could survive in such harsh conditions of zero-gravity, high radiation levels and a lack of natural light. But there were other reasons too. It’s healthier and more cost effective if astronauts can grow and eat fresh fruits and vegetables. They also can help boost O2 levels in the space station.

Now, a paper published in the journal Open Agriculture shows that “people-plant interactions” are therapeutic.

Charles Guy, professor of plant physiology and biochemistry, and Raymond Odeh a masters student from the University of Florida, revealed how nature provides behavioral and cognitive benefits to people on Earth and space, by collecting anecdotes from astronauts living in the International Space Station.

Peggy Whitson, the longest serving American astronaut and oldest woman to go to space, wrote in an email that “it was surprising to me how great six soybean plants looked.”

“I guess seeing something green for the first time in a month and a half had a real effect. From a psychological perspective, I think it’s interesting that the reaction was as dramatic as it was. Guess if we go to Mars, we need a garden!”

On Earth, there are about 600 species of economically useful plants and 7000 edible species. The numbers are pale in comparison to the 28,000 species that humans use for gardening and landscaping.

The first flower blossomed in space for the first time in 2016. Scott Kelly tweeted a picture of a bright orange zinnia flower, and told the ground team that autonomous gardening may not be a such a good idea.

Our plants aren't looking too good. Would be a problem on Mars. I'm going to have to channel my inner Mark Watney. pic.twitter.com/m30bwCKA3w

“You know, I think if we’re going to Mars, and we were growing stuff, we would be responsible for deciding when the stuff needed water. Kind of like in my backyard, I look at it and say ‘Oh, maybe I should water the grass today.’ I think this is how this should be handled.”

If humans are to follow Elon Musk’s vision of colonising Mars one day, then it may not be such a bad idea to take your favourite plant with you.

“Our species evolved in a natural world, not in an unnatural man-made built environment,” the researchers concluded. ®