Another extraordinary performance from the 'tech company' 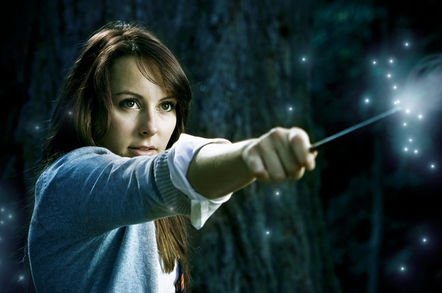 Comment Performance art company Magic Leap has astonished and wowed critics with its latest outing: a $500m funding round.

Having built a tremendous amount of buzz by teasing the tech world with a gloriously satirical video in which the company's founder Rony Abovitz used global soft focus and "inspiring voiceover" to talk about the company as if it were an Einstein puppy, the company recently dropped the "news" that it had raised yet more money for its made-up augmented reality technology.

The live-feed installation added new "investors" including Temasek, EDBI, Grupo Globo and Janus Henderson Investors. Abovitz spoke on its opening night to "welcome [them] to the Magic Leap family".

The cast of actors provided strong performances, particularly those assigned the role of "tech reporters". In a twist that some are calling "Jobsian genius", the fact that Magic Leap has yet to provide any technology despite years of work and over $1bn in investment was woven into the story to keep the franchise alive.

"It's still not totally clear what Magic Leap is doing, but it sure has raised a ton of money in order to do whatever it is that it's doing," a reporter from TechCrunch regaled, while displaying the site's investigative prowess by noting: "We've been able to gather that the company may be launching a device called 'Magic Leap One'."

Meanwhile, Futurism pushed the envelope even further by skipping over the actual announcement and referring to a future made-up funding round. "It might become even more 'magical' if it receives the $1-billion investment that the company is reportedly raising," it noted. A meta marvel.

The usually reliable Financial Times disappointed some with its performance, however. Its headline: "Magic Leap conjures $502m in funds for $1.9bn total equity" was seen as concentrating too much on the made-up aspect of the technology, although defenders say it was simply playing with the convention of joyous puns on the name "magic" or "leap".

It did, however, report on Abovitz's lines calling its made-up technology "hyper-personal computing" that would "spill outside the computer", even going as far as linking the company to Harry Potter.

Some were concerned that Magic Leap would not be able to maintain another season of its show, with some calling it old and outdated. But based on this performance, there is life yet in the concept.

In fact, such has been Magic Leap's success that it has already spawned an offshoot show called "Torch 3D", where Portland-based former Magic Leapers just pocketed $3.5m in a seed round. GeekWire noted that Torch will "make 3D prototyping fast and simple, even for those who aren't technically advanced with VR and AR software development".

Torch 3D is going even bolder, telling the reporter: "We are establishing a new space of pre-production workflow for AR and VR applications that we haven't seen yet... Based on several months of research, the most used alternative we see is still pencil and paper." Genius. ®