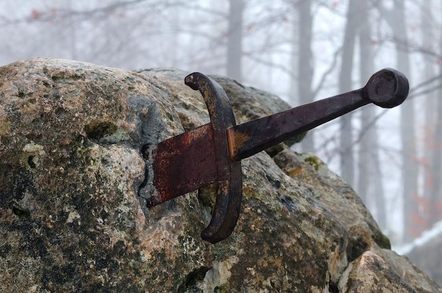 Someone else's replica of Excalibur, the legendary sword in the stone

The legendary sword has been pulled from the stone – but the owner wants it back and a crowdfunding campaign has been set up to replace the blade.

The iron sword in question was sunk into a rock beside Llangorse Lake in the Brecon Beacons, Wales, by local campsite owner Garnet Davies.

"The whole purpose is for kids to have a go at it," Davies told the Brecon and Radnor Express, "and every now and again I have had to bend it straight but perhaps over time it has fractured."

It is thought that the sword disappeared last weekend, but nobody's sure whether it vanished because of a thief or someone actually succeeded at recreating the legend of King Arthur. According to the legend, the wizard Merlin embedded a sword into a stone, swearing that whoever pulled it out again would become king of all England.

A crowdfunding campaign has been set up by a local photographer to replace the sword at the Lakeside Caravan Park. It has, at the time of writing, beaten its £500 target by £40.

Arthur pulled it out for someone else to use in a tournament, according to one popular retelling of the tale. He later set up shop in the mythical city of Camelot along with Queen Guinevere, doing various knightly things and creating a multi-millennia-spanning market for big round tables, long pointy women's hats and names for the machines of the National Lottery.

Llangorse Lake, the largest in Wales, was home to the ancient kings of Brycheiniog, an ancient Welsh kingdom that covers the northern tips of the South Wales valleys and part of the modern-day Brecons. Forces of Æthelflæd, "Lady of the Mercians" and daughter of legendary English king Alfred the Great, invaded Brycheiniog in the 10th century and captured its queen in her fort by the lake.

There is one other possible explanation for the disappearance of the sword. The lake is reputedly home to an afanc, which, in Welsh mythology, is a river or lake monster. Perhaps it fancied a go at ruling us all? ®