Partners now have trade wars to fly around 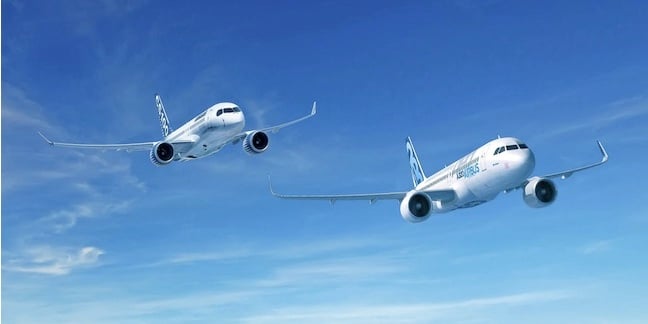 A Bombardier C-series and an Airbus A320

Airbus has struck a deal to buy a majority stake in Canadian plane-maker Bombardier's C Series Aircraft in a deal that will mean a shakeup for the global aviation market.

Bombardier's C Series are regional jets with between 100 and 150 seats. Neither Airbus nor its main rival Boeing currently compete in this market. Airbus hasn't sold an A318 for years. Boeing's 717 is coveted by some carriers, but production of the type ended in 2006.

Bombardier and Brazil's Embraer do well in the regional jet market. China's having a waft at it too, while Japan's Mitsubishi is a year or two away from flying a plane in this class.

The deal's just-about a bailout: Bombardier has been propped up by Canadian taxpayers and Airbus is paying no cash for its majority stake. Bombardier has to cover some outgoings for a few years. But Canada will keep Bombardier-related jobs. As will the UK, as the company makes C-series wings there.

Airbus and Bombardier's announcement emphasises that the latter will benefit from the former's global supply chain and scale, which will make life interesting for rivals.

Those rivals will likely respond in the courts as well as on the drawing board, as Boeing has recently fought a trade dispute with Bombardier alleging state subsidies allow it to sell planes below cost price. Bombardier counters that US tariffs are unfair. Airbus, meanwhile, contends that Boeing has received unfair state aid for its forthcoming 777x aircraft in another dispute.

Critically, the new deal will see the C-series built at Airbus' plant in the USA, a hoped-for method of dodging US tariffs.

Aviation competition matters already occupy rather a lot of time at the World Trade Organisation and The Register imagines that body will soon be busier still as it is asked to figure out just who subsidises what and if any of it is fair.

It'll take months, maybe years, to sort that out. For now, Airbus has emerged with a range spanning aircraft seating between 100 and 800 passengers (if carriers are willing to install Sardine Class on A380s).

The aviation market will see another milestone later this week, when Airbus' A330neo makes its first flight. The update to the twin-engine medium-to-long-haul workhorse will see it become more fuel efficient thanks to some design tweaks and certification of newer engines. ®