BOFH: Oh dear. Did someone get lost on the Audit Trail? 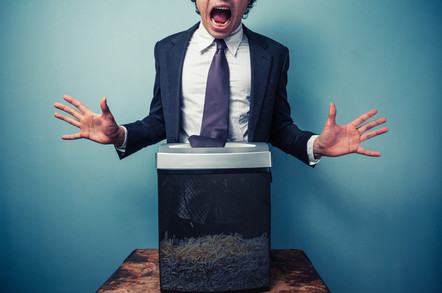 Episode 13 So I'm walking down the corridor from Mission Control with about a ream of financial paperwork when I notice the Boss coming the other way with the IT Director in tow - never a good sign.

I quickly slip down a side corridor towards the lifts but not so quickly that the Boss doesn't see me going. I get to the lifts just as the doors open and take a moment to look around furtively before jumping in and pressing a button.

"Where are you going?" the Boss blurts from a distance, eyeing the potentially important documents that I have on my person.

"Ah, just to the basement," I lie, pressing the button for one floor up.

"What for?" he wheezes as the doors close.

"Oh, ahhhhmm, just going to see if all the computer ports down there are still working at full duplex," I blather, as the lift heads UP.

I stroll out of the lift at a leisurely pace, knowing full well that the Boss is on my tail but also knowing that he won't get to me before...

"Wait," he gasps, stepping out of the other lift just as I step into the shredder room.

It's times like this that the full value of mindless executive paranoia is fully realised. Having heard that someone, somewhere, somehow had managed to piece together shredded paper, the powers that be purchased a two-pass shredder that chops as well as shreds, converting documents into confetti in a matter of moments.

"What're you doing?!" the Boss calls down the corridor as whatever-it-is inside the shredder slowly spins up to its million RPM operating speed. The fear at what would happen if this thing - having lain disused in a damp basement for several years before being moved to this room - threw a bearing is offset by my technical keenness to see exactly what it's capable of.

I grab a few sheets of paper and stuff them into the danger-sticker emblazoned inlet slot. An unseen force TARDISes the pages away to another galaxy under the machine a tiny pile of unevenly diced paper appears on the floor. That alone would be unimpressive, were it not eclipsed by the tombstone-heavy >WHISKSKS< and >TOK< >TOK< >TOK< >TOK< noises which seem to echo through the building, indicating that this thing could probably reduce a 1980s Yellow Pages to confetti with the same amount of ease - along with the phone booth it was chained to and the phone pole that serviced it.

"Uh... What are you shredding?" the Boss asks, arriving in the doorway.

"Ah, just some old papers - nothing important," I lie, dropping the whole pile into the inlet tray.

About two seconds later, the confetti pile has grown dramatically and the unit is spinning slowly down.

"This wouldn't have anything to do with the financial audit would it?" the Boss asks.

"The financial audit; what's that then?" I lie, in a very unconvincing manner.

"You know very well what it is. The new company auditors have discovered some anomalies in the verification of expenses claims over the past several years. They believe that someone's being submitting duplicate documents."

"No, I'm after your expense form duplicates."

"Yes, yours and your assistant's."

"Hmm, I'd probably have to look in my filing cabinet for that," I say. "- because I keep them all in hard copy."

"So this wouldn't be them there then?" the Boss asks pointing at the confetti.

"Those, no, this is just preventative maintenance. One of our tasks is to just run this up with a bit of a load on it just to see how it performs."

"Really? When did you check it last ?"

"So you wouldn't mind if I collected this?" he says.

"That?" I say. "Go for your life. Anyway, love to stay and chat but I need to go visit finance on 4th. Printer problem."

"Really? Mind if I tag along?"

The Boss carefully scoops the confetti into a bag which he takes great pains in sealing, signing and dating.

"Just here about the printer issue," I say, when we arrive on 4th.

"What printer issue?" one of the beancounters asks. "Apparently there's some colour issue on one of the printers," I say, an excuse which is guaranteed to appeal to any pedant within hearing range.

"Over there," one of the Beancounters calls out. "That one is all over the place."

The Boss traipses over with me as I open the machine up, shake the toner cartridges, run a couple of test prints, replace the cyan cartridge, run some more test prints and eventually give up.

"Probably best get an engineer in," I say, noticing that the Boss is taking great pains to ensure that he's between me and the window into the Beancounter's meeting room.

"Well if that's all," I say to him, "I might just pop up to HR - got to check on their wireless access point."

"You know, I actually have to go to H.R myself," the Boss says. "I might just ride up with you."

"No problem," he says feigning enthusiasm.

We get to HR and I go through the motions of checking the wireless access point, unplugging it, plugging it back in. The Boss, meantime, is having a sneaky chat with the head of HR and pretending not to look my way.

"I'll ride down with you!" the Boss says, quickly ending his conversation and heading my way.

"Oh no, company's great in my role," I say, pressing the Emergency stop button on the lift.

"In your role?" the Boss asks.

"Yes. I'm the decoy," I say, as the sound of a heavily loaded shredder start echoing through the building.