Woman stands up to powerful bully. What happened next will not shock you 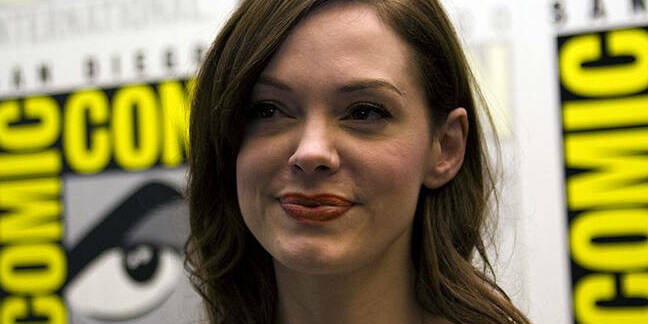 Analysis Twitter was today accused of censorship after it froze the account of actress Rose McGowan – who had just publicly slammed alleged sex fiend Harvey Weinstein.

McGowan was surprised to find herself locked out of her @rosemcgowan profile on Wednesday night, and posted on Instagram a screengrab of a telling-off she received from the milliblogging website. "Twitter has suspended me. There are powerful forces at work. Be my voice," she noted.

The message from Twitter did not explain why McGowan's account was frozen, although informed her she had broken the network's rules, and that she needed to delete the offending tweets to restore her account.

McGowan rose to prominence this week after publicly blasting Hollywood grandee Harvey Weinstein, who has been accused of sexually assaulting and buying the silence of more than a dozen women over a period of decades. The film producer was fired on Sunday from the Weinstein Company, which he cofounded, as a result of the allegations.

More than two dozen women – most of them actresses and some of them household names – have accused Harvey Weinstein of inappropriate sexual contact ranging from creepy touching to rape. They include:

In a statement last week, Weinstein, who is now facing police probes, said: "I realized some time ago that I needed to be a better person and my interactions with the people I work with have changed. I appreciate the way I’ve behaved with colleagues in the past has caused a lot of pain, and I sincerely apologize for it."

McGowan herself reached a $100,000 settlement with the mogul in 1997 following “an episode in a hotel room during the Sundance Film Festival,” and signed a non-disclosure agreement. And by episode in a hotel room, she means: alleged rape. Since two articles came out this week – one in the New York Times and another in the New Yorker – detailing Weinstein's alleged abusive and predatory behavior, she has been one of his most vocal critics online.

Many saw an immediate double-standard in her account being suspended, with McGowan's profile locked while many others – including those of white supremacists and even that of the US President – being allowed to stay open despite posting highly objectionable content.

"Hey @Twitter let us know which of these rules @rosemcgowan broke. Asking for multiple victims of sexual violence," tweeted actress Jessica Chastain – just one of hundreds of users who vented at the decision.

Many questioned Twitter's approach, and some high-profile users, including comedy writer Graham Linehan, threatened to quit the service altogether in response.

"I'm going to deactivate my account after I've done a bit of housekeeping. Twitter is a toilet and I don't want to be complicit anymore," Linehan tweeted. "Reasons (short version): No consequences for Trump threat, Nazis with blue ticks, bots, harassers gaming their abuse algorithms."

But following the outcry, the San Francisco biz changed tack. A spokesperson told The Register that McGowan's account had been "temporarily locked" because she had included a private phone number in one of her tweets. The actress has since been allowed back into her account.

"We have been in touch with Ms. McGowan's team," the spokesperson said. "We want to explain that her account was temporarily locked because one of her tweets included a private phone number, which violates of our terms of service. The tweet was removed and her account has been unlocked. We will be clearer about these policies and decisions in the future."

The company also tried to answer the accusations of censorship by noting: "Twitter is proud to empower and support the voices on our platform, especially those that speak truth to power. We stand with the brave women and men who use Twitter to share their stories, and will work hard every day to improve our processes to protect those voices."

Twitter CEO Jack Dorsey then linked to the official statement from his personal Twitter account, noting: "We need to be a lot more transparent in our actions in order to build trust."

We haven't been able to confirm the details of the tweet that lead to McGowan's suspension, or whose private number she posted, or whether it was in an old tweet or a recent message. We have contacted the actress and will update this story if she or her team responds.

Twitter has long been criticized for its approach that it says supports free speech but which critics say only amplifies bullying, aggression and borderline illegal threats. In one of the most high-profile cases, right-wing attention junkie Milo Yiannopoulos was banned permanently from the service in July last year for virtually orchestrating racial abuse at actress Leslie Jones.

"Your account has been permanently suspended for repeated violations of the Twitter Rules, specifically our rules prohibiting participating in or inciting abuse of individuals. Given that you have previously received repeated warnings for similar violations, your account will not be restored," a message from the company read. ®

PS: Top Amazon video content exec Roy Price has been put on leave by the web giant after allegedly telling a producer of one of his shows: "You will love my dick." Classy.