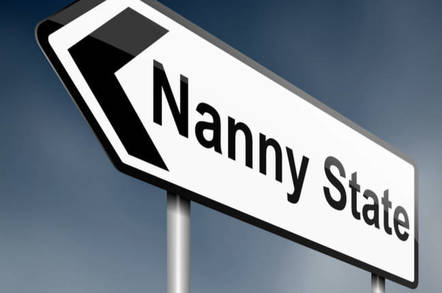 The British government is now proposing a direct tax on social media companies while inviting everyone else to hush and think of the children.

It comes as the chairwoman of Ofcom, Patricia Hodgson, opined (£) that the two platforms are "publishers" rather than the neutral hosts of other people's published works that they insist they are.

In addition, the government also wants to slap Facebook and Twitter with an abuse tax for the "undeniable suffering" they allegedly cause, the proceeds of which could be used to fund "campaigns against hate", as a government statement said.

"We recognise that the internet is challenging our society and that government needs to react to new social norms," said Minister of Fun Karen Bradley in the paper's foreword. "This green paper will promote debate on what we think acceptable behaviours are online."

"The government wants to partner with industry," Bradley's paper said. "Technology companies have a responsibility to promote online safety and protect the wellbeing and rights of all of their users. This means they have to be our partners as we work to prevent harmful behaviours and content."

Bombastic diktats to social media firms aside, the majority of the paper appears genuinely concerned with children and young people alone, and how "walled gardens" and other such targeted apps can be created to encourage kids to stay within safe spaces where responsible adults can keep an eye on what they're being exposed to. Lego's Life app gets an approving mention, as does the YouTube Kids app and BBC iPlayer Kids.

On the flip side, it reiterates the government's intention to make everyone ask the State's permission to view pornography online. Plans for tackling hate crime, including the £200k-per-year Online Hate Crime Hub run by the National Police Chiefs' Council, will continue.

Central to the Green Paper is expanding the remit of the UK Council for Child Internet Safety (UKCCIS), which is explicitly being done to cover "all users" of the internet in the UK instead of just the under-18s.

The UKCIS (as it will be rebranded) has a number of working groups; its Technical Working Group's stated remit covers the tracking of "technology platforms" of interest to children and young people, encryption and online child abuse imagery. Chief among the government's hopes is that the working group can be expanded into a Technical Network, featuring "engineers and innovative tech businesses" who will make that nasty interwebulator thingy "safer for all users".

"Government will consider what we can do to support and develop a world-class online safety industry in Britain," boasted the paper, "in line with our manifesto ambition to make Britain the best place in the world to start and run a digital business."

Unusually, the author of the Green Paper seems to be aware that previous top-down government initiatives attacking the internet in general have failed to bring public opinion round to civil servants' and ministers' way of thinking: "We know that any Strategy from government that sounds like it is instructing people how to behave runs the risk of missing the mark. This is why, we will look at more innovative delivery models to reach users." [sic]

Unfortunately, this just translates as instructing government-linked bodies to "deliver messages about safety online" whenever anyone has the misfortune to click on their websites.

The Technical Working Group is chaired by Fred Langford, deputy chief exec of the Internet Watch Foundation, and is staffed by child protection experts, reps from Apple and Google, others from charities – and just one "technical expert", as its founding document reveals (PDF, 2 pages).

The full Green Paper, in all its 62-page PDF glory, can be read on the GOV.UK website here. ®