Has software-defined storage supplier Nexenta's growth stalled? Far from it, its CEO and chairman insisted. It's booming and additional significant funding is coming, apparently.

Nexenta was anticipating a stock-market debut in 2015, but has since had a $7.7m series-G funding round at the end of 2016, and a co-founder has left.

Both of these suggest problems.

Don't bother looking for news of this on Nexenta's press release list, because you won't find it.

Why was the G-round funding needed? Was it sufficient on its own or a tide-me-over round while something more significant was arranged?

It's the latter, said chairman and CEO Tarkan Maner, who told us: "We are working on a FINAL big round before going cash flow positive; and, per the big strategic investor’s request, we keep the round details confidential. All I can tell you – it is a big strategic round with a global lead and strategic partners!"

This would be an H-round and the wording suggests double-digit millions of dollars.

The G-round funds came from West Summit Capital and Javelin Ventures, and took total Nexenta funding to $121.5mn, according to Crunchbase. 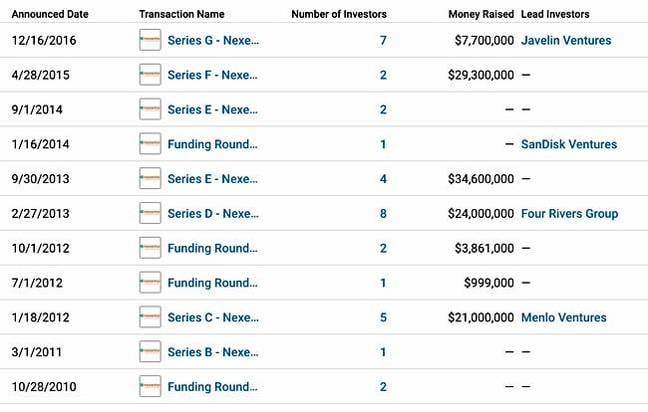 Back in February 2015, the company took in an undisclosed amount of funding in what it described as a pre-IPO round. Crunchbase listed it as a $29.3mn round.

The company's most recent product announcement was the Nexenta Edge v2.0, a scale-out block, file, and object storage platform, in May this year.

Maner said the company has grown to a significant size. "As the SDS (SW-defined Storage) category creator and clear leader, Nexenta also just surpassed $100mn in revenues – cumulative – since inception.

"Yes, we believe we are the only company who has achieved this in Open SDS – and 90 per cent software revenues, not services. [That's] $100m worth of bookings for 2 exabytes SDS sold. It comes to $50,000/petabyte (round numbers) as perpetual licenses and 20per cent maintenance."

The company says it has more than 6,000 engagements and over 2,900 paying customers. It says it is pushing and riding the SDS wave, with this chart illustrating what it means: 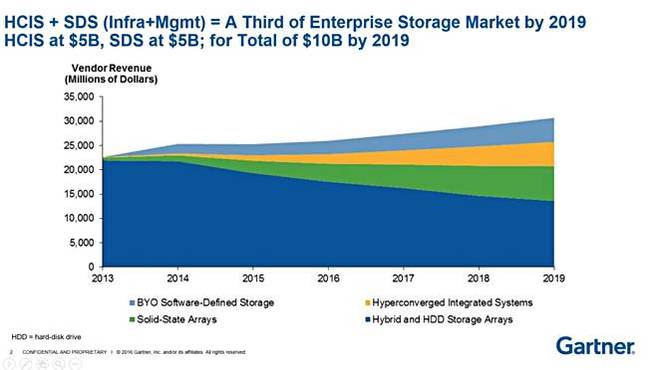 The SDS market is highly fragmented, with more than 30 hardware vendors. VMware, RedHat and Nexenta leading the market on “software-only” deployments.

Maner claims Nexenta is "moving the industry into the right direction… and along with other great providers [and] making the sea levels all rise."