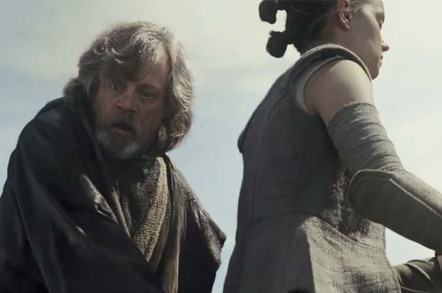 Fans have taken to Twitter to complain of difficulties booking their tickets for its December 14 release.

You website is down? Seriously how can you not have the servers ready for a massive movie like this and a surge of people wanting to book?

Are you taking the Mick?! I can't even get on to book tickets!

Cineworld promises that there are no issues with its site and recommends they keep trying.

Hi there, our website is working but we're experiencing high levels of customers trying to book so keep trying

In other news, the trailer for The Last Jedi has hit and we can safely say it seems that Rey, Luke, Leia and Kylo Ren will have their work cut out for them. And, yes, per tradition, there will be lots of cool fights in space.

Word of warning: the trailer is particularly spoilerific. But you can watch below at your own risk.

Rogue One took in about $250m worldwide on its opening weekend, according to Box Office Mojo. ®