All hexagons and no pentagons makes Jack a very dull... 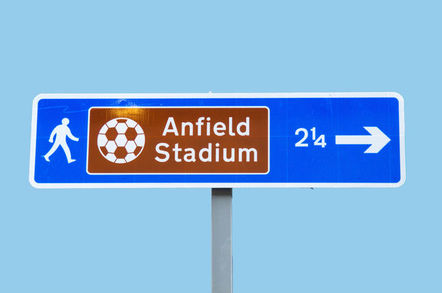 A petition has been launched to update the UK Traffic Signs Regulations to include a geometrically correct football.

The ball shown on UK street signs to denote football grounds is made up entirely of hexagons. And if you care about your geometry, you'll know it's mathematically impossible to construct a ball using only hexagons.

"Changing this to the correct pattern of hexagons and pentagons would help raise public awareness and appreciation of geometry," reads the petition.

So far the petition against "Statutory Instrument 2016 No. 362, the image for a Football ground (Leisure facility), [which] is incorrectly a pattern of white and dark hexagons" has received more than 10,000 signatures.

This means the UK government will have to respond and inform the petitioner what it plans to do about this. The aim is to get 100,000 signatures by April 2018, meaning it would automatically be considered for debate in the Houses Of Parliament.

Mathematician Matt Parker, who's behind the campaign 'Say no to mathematically impossible street signs', described the current signs as a "national embarrassment" in his video promoting the petition.

"The UK has a long tradition in sport and also has a very proud tradition in maths and science. With the government going 'Pentagons, hexagons, what does it really matter?' – it just feels like they don't really care about all the mathematics our society is based on."

He added: "If you going fishing, you follow signs that have a fish on them, not a Lovecraftian monster from beyond our perception... [Every other sign] looks like what it is. Why don't the footballs?"

He wants the current symbol 38, denoting footballs on traffic signs, to be updated so that future street signs are done correctly. "I appreciate updating all the old ones might be considered a misuse of taxpayers' funds," he said. ®