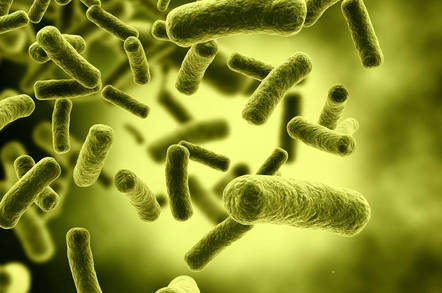 Scientists are engineering these critters in order to some day help more cheaply and efficiently manufacture materials that can perform automated tasks.

Lingchong You, a synthetic biologist at Duke University who was part of the research team, told The Register: "We do believe biofabrication is cheaper and requires less energy" than other approaches.

In the past, scientists have programmed bio-building blocks such as proteins, peptides and DNA to make everything from cylinders to underwater adhesives. For example, in 2014, researchers at MIT engineered bacteria to create thin films that conduct electricity. They placed bacteria in a specific pattern on a 2D surface so that they would pick up inorganic matter.

In the new work described in "Programmable assembly of pressure sensors using pattern-forming bacteria", You and his collaborators, led by Yangxiaolu Cao, programmed bacteria to self-assemble into a functional 3D structure, instead of patterning them in advance, improving the flexibility for making complex physical shapes. They chose a pressure sensor as a "demonstration".

To make it, they genetically programmed bacteria colonies that would form a dome, the size and shape of which is controlled by the critters' growth environment. Once they grew naturally to form a hemisphere, some of the bacteria would pick up gold nanoparticles to form their shells.

Then the researchers took two domes and hooked them up to LED lightbulbs. When they pushed the domes by hand or with a pump, they pressed together, increasing their conductivity and making the bulbs light up by an amount proportional to the pressure.

The paper appeared this week in Nature Biotechnology.

It's a "very exciting work," Timothy Lu, a synthetic biologist at MIT, who was not involved in the research, told The Register. "I think this represents a major step forward in the field of living materials."

He believes self-assembling materials could create new manufacturing processes that may use less energy or be better for the environment than the ones today. But "the design rules for enabling bottoms-up assembly of novel materials are still not well understood," he cautioned.

Indeed, we won't be seeing bacteria 3D printers on the market any time soon.

Matthew Bennett, a synthetic biologist at Rice University who was not involved in the project, told The Register, "It remains to be seen how far these technologies can progress. Some fundamental problems, like how to keep cells within a material alive for long periods of time, still need to be addressed."

You said his team could do more work to improve the fabrication process's robustness, as well as the different types of structures possible. "The simple lack of diverse patterns we can generate fundamentally limits our imagination in terms of what is even possible," he said. ®

It's easier to mine than uraninite ore, too

Drug could save millions of lives lost to killer microbes